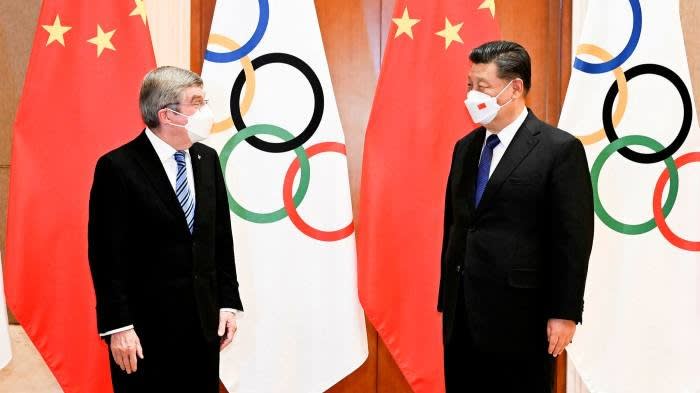 Chinese President Xi Jinping meets with IOC President Thomas Bach Rare face to face An exchange was made with an overseas official as Beijing maintains strict coronavirus precautions ahead of the Winter Olympics in February.

Discussions between Xi, who has not left the country since early 2020, and Bach on Tuesday included a closed-loop system for the Beijing Olympics designed to curb the spread of the virus from Olympic participants to the wider population.

The IOC has come under scrutiny over its ties to China and criticized last year for failing to back calls for an investigation into tennis stars Peng Shuai sexual assault allegations against a former senior Chinese official.

What do you think of the Winter Olympics held in Beijing?tell me your idea [email protected]. Thank you for reading FirstFT Asia.Here’s the rest of the news today – Emily

1. The West pledges to keep NATO open to new members US and NATO tell Moscow they are committed to maintaining transatlantic alliance Open to new membersrejected the Russian central security demands in a written reply that could determine the outcome of the Ukraine crisis.

3. Apple tops the Chinese smartphone market Apple has Reclaims the top spot in smartphone sales It was the first in China in six years as tough U.S. sanctions restricted shipments from rival Huawei. The California company held a 23 percent share of the world’s largest mobile phone market in the fourth quarter of 2021, according to research firm Counterpoint.

4. Banks object to Beijing’s overseas listing rules Asia’s top banking lobby, including Goldman Sachs, Morgan Stanley and JPMorgan, has warned Beijing that the system for Chinese companies listing overseas will be overhauled may prevent them from giving advice An initial public offering, which would jeopardize the source of funding for the country’s leading companies.

income On the big day of earnings, companies reporting results include Apple, Deutsche Bank, easyJet, JetBlue, LVMH, Mastercard, McDonald’s, Samsung Electronics, SAP and Visa. We apologize for the misstatement of Apple’s earnings date in yesterday’s edition. They will report from the US on Thursday.

Join us to learn about the future of business education in the FT: The Ultimate Guide to MBA Education for Global Business Leaders. The event provides an ideal opportunity for young professionals and seasoned executives to learn how to improve their skills and accelerate their careers with an MBA. Register today.

When activist investors attack is not a bad thing Activist investor demands—such as those of Unilever and Peloton—can prompt action from self-satisfied executives, force boards to deal with incompetent managers, and question ill-considered mergers. All of these are desperately needed nowthinks Brooke Master.

San Francisco scares away tech crowd due to failure to resolve The epidemic of poverty continues, Startup founders, engineers and venture capitalists are leaving the city. Hannah Murphy writes that if the city wants to reclaim its tech crown, it can’t go on as usual.

You call it a party, Boris Johnson? It’s unclear how long the list of political casualties from the lockdown-violating Downing Street BYOB bash might be, but those who don’t return will ask for the rest of their lives: is it really worth it A warm cup of Merlot and a little cheese wrap? Robert Shrimsley asked.

Hybrid jobs are polarizing. but why?In this episode of the Working It podcast, Isabel Berwick talks to Camilla Cavendish and Pilita Clark about why it’s become The most controversial topics in the workplace now.