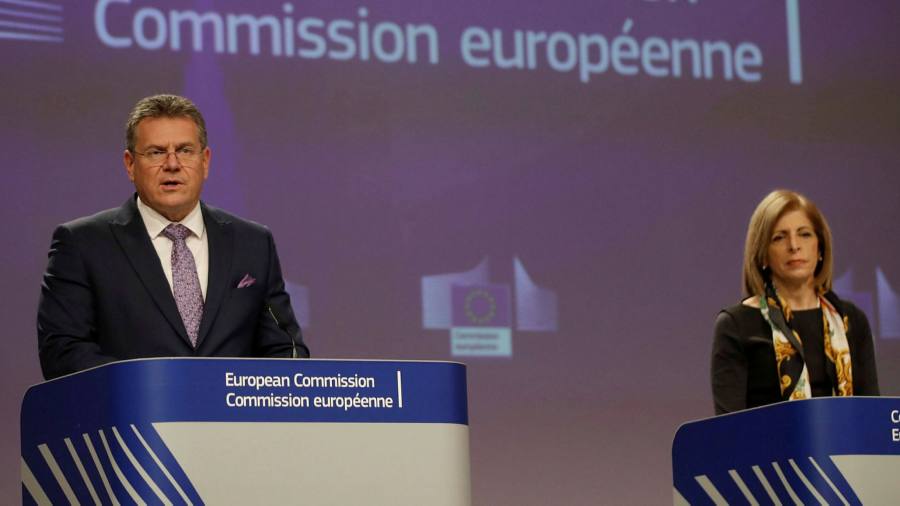 
The EU is changing its rules to allow the UK to continue to supply medicines to Northern Ireland, which is the first step in resolving the region’s post-Brexit trade dispute.

Brussels will legislate to allow UK-approved drugs to enter Northern Ireland to avoid possible shortages due to post-Brexit regulations. When Britain left the European Union to avoid trade borders on the island of Ireland, the region was still in a single commodity market.

Frost hopes to radically change the operation of the Northern Ireland Agreement governing trade in the region. But this week, he gave up the request to remove the European Court of Justice supervision from the agreement, and proposed to reach an interim agreement on the most pressing issues and postpone other issues until later.

He warned on Friday that negotiations are still difficult, but the concessions have convinced many EU diplomats that Britain is seeking an agreement.

Sefcovic told reporters in Brussels that the agreement on drugs shows that “the agreement has the flexibility to work on the ground. We must bring this momentum into other areas of discussion.”

Frost is looking for an independent arbitration system to manage disputes related to the implementation of the agreement, which will remove EU judges, but still allow them to supervise EU legal affairs. But Sefcovic rejected the idea on Friday, saying that the UK should stick to what it signed when it left the EU.

“Without the European Court of Justice, you cannot enter the single market,” he said.He also claimed that the agreement is “targeting Benefits of Northern Ireland“, citing increased investment and more and more local products on supermarket shelves.

The two sides will continue to discuss reducing customs and animal and food inspections between Northern Ireland and the British mainland.

The European Union proposed in October to establish a “fast track” for goods shipped from the British mainland to Northern Ireland, which are unlikely to cross the border into Ireland and the wider single market. Brussels claims that this will reduce customs inspections by half and health inspections by 80%. British diplomats said the proposal is far from enough.

Frost said that the drug law “can constitute a constructive way forward”, but the UK must scrutinize it carefully. “Overall, with the exception of potential exceptions for drugs, I think the negotiations are not yet close to delivering a result that can truly solve the issues raised by the protocol,” he added.

“The EU’s proposal only covers certain areas and is not enough to alleviate the burden faced by the people of Northern Ireland; or to create conditions for true cross-community support.”

Frost also reiterated his threat to trigger Article 16 of the Protocol, which would unilaterally suspend some of its provisions.