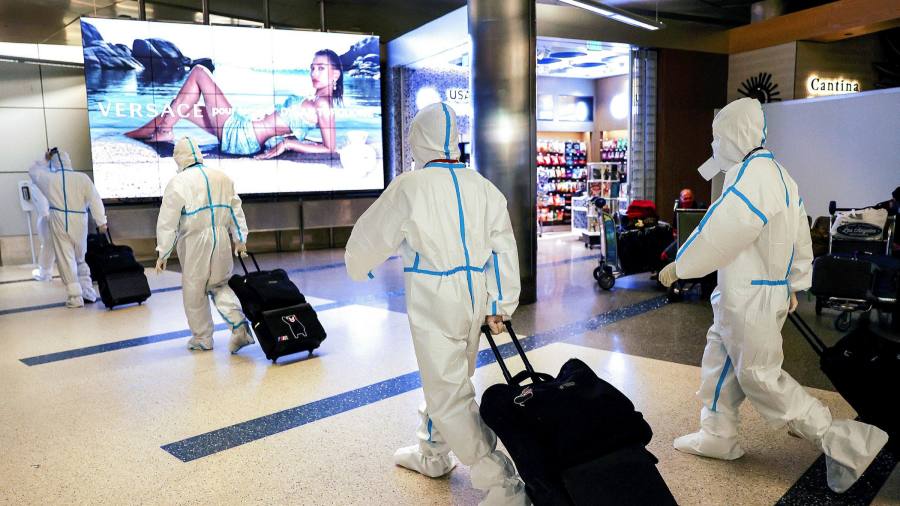 Winter holidays are fast approaching and the uncertainty surrounding the Omicron variant, combined with renewed Covid-19 restrictions (which saw Brussels’ European quarter descend into scenes of violence yesterday) risk damping down not only festive spirits but also economic forecasts. Eurozone finance ministers are gathering in Brussels today and we’ll take a look at the agenda.

Meanwhile, on the foreign policy front, the Financial Times reports that weeks of sustained US diplomatic engagement and the sharing of intelligence normally reserved for Washington’s closest allies have helped convince some previously sceptical capitals, including Berlin, that Russia could soon invade Ukraine.

US President Joe Biden will warn Russia’s Vladimir Putin against any invasion in a video call tomorrow, with the full backing of Nato and the EU for retaliatory measures.

Over in Turkey, the leader of the opposition Republican People’s party spoke to the FT and we’ll unpack here why a regime change in Ankara may not be as straightforward as some in the EU think.

This article is an on-site version of our Europe Express newsletter. Sign up here to get the newsletter sent straight to your inbox every weekday morning

The Omicron variant doesn’t appear on the formal agenda of eurogroup meetings being held today, but the virus will nevertheless hang heavily over proceedings, writes Sam Fleming in Brussels.

It will be the group’s first formal get-together since the emergence of the variant less than two weeks ago. The gravity of the upsurge was underscored on Friday by IMF chief Kristalina Georgieva, who said she already expected the fund’s October growth forecasts to be downgraded because of the outbreak.

“A new variant that may spread very rapidly can dent confidence, and in that sense, we are likely to see some downgrades of our October projections for global growth,” Georgieva said at a Reuters conference.

Georgieva will be in Brussels today on her first official visit to the EU since the beginning of 2020, where she will present the fund’s preliminary assessment of the euro area economy. The fund’s concern about the economic impact of the new variant is widely shared — and understandable given the renewed lockdowns that are being seen around the world and in Europe.

As Laurence Boone, chief economist of the OECD, told the FT last week, the variant was “adding to the already high level of uncertainty and that could be a threat to the recovery, delaying a return to normality or something even worse”.

Already in November the European Commission was listing the threat of fresh Covid-19 outbreaks among the downside risks to its otherwise buoyant growth forecasts, as it warned of mounting “headwinds” to the outlook. Now it appears that one of those risks is crystallising, triggering violent gyrations in financial markets.

All this could have implications for the outlook for euro area fiscal policy, given talk has begun to shift towards ways of cautiously exiting the massive stimulus programmes that have been rolled out since last spring.

But the reality is that it remains too early to draw strong conclusions about the economic repercussions of Omicron. While the strain displays a plethora of genetic mutations that could make it more transmissible and likelier to bypass vaccine protections, scientific evidence about its attributes remains partial.

Anthony Fauci, Biden’s chief medical adviser, sounded a cautiously optimistic note yesterday, saying that while it was wrong to jump to conclusions, the early signals in terms of severity were “a bit encouraging”.

What’s more, lockdowns have become progressively more targeted and less punishing during the successive waves of Covid-19, lessening the resulting economic damage. Booster campaigns are finally gathering pace in the EU, where two-thirds of the EU population is fully vaccinated, which may help governments avoid the need for draconian virus containment measures.

Indeed, while US Federal Reserve chair Jay Powell acknowledged Omicron as a risk to growth last week, he spent far more time talking about the need to keep a lid on inflation. Some in the European Central Bank also worry that inflation will display greater staying power than expected.

Omicron is heaping new uncertainty over the euro area’s economic prospects. The one confident prediction ministers can make is that the virus will continue to surprise them.

MBA and executive MBA programmes taught in Europe dedicate a larger part of their courses to environmental, social and governance subjects compared with schools in the rest of the world. The average proportion of core MBA teaching hours dedicated to ESG in Europe is 75 per cent higher than the rest of the world, where only 12 per cent of the degree is related to ESG topics. (More here)

The EU has been clashing with Turkey’s Recep Tayyip Erdogan for years, but a regime change would not necessarily be straightforward for the bloc, writes Laura Pitel in Ankara.

An unlikely alliance of anti-Erdogan parties is convinced that it can topple the Turkish president in the next national vote, which is scheduled for 2023 but could be called earlier. “A large segment of society has embraced the idea that these people are on their way out,” Kemal Kilicdaroglu, the leader of the Republican People’s party (CHP), told the FT in an interview this weekend.

Diplomats posted in Ankara say, however, that there is often naivete back home about what a post-Erdogan government might look like — especially when it comes to foreign policy.

Kilicdaroglu insists that his party doesn’t believe in “using the outside world as a tool of domestic politics”. Yet at times the CHP has tried to outflank Erdogan. When the government sought to dial down tensions in a dispute over gas in the eastern Mediterranean in 2020 by calling a Turkish drillship back to port, Kilicdaroglu attacked the government for making a “concession”.

Even more contentious is the party’s Syria policy, forged against the backdrop of strong anti-refugee sentiment among the general public.
The CHP has said that, if it comes to power, it will send home the roughly 3.6m Syrians who fled to Turkey after the eruption of civil war in their country.

“Of course no one will be forced to go,” Kilicdaroglu insists. Under his proposal, Turkey would restore diplomatic relations with Syrian president Bashar al-Assad and then help to rebuild the war-torn country. Ankara would obtain reassurances from Assad that returnees and their property would be safe, Kilicdaroglu says. He would seek EU funds in support of this plan, even though European officials say that, without a political transition in Syria, that idea is a no-go.

Kilicdaroglu rightly argues that many Syrians in Turkey live difficult lives marred by exploitation and low pay. But the plan he describes is seen by experts not just as a fantasy — but also a dangerous one that risks imperilling the safety of millions of Syrians.

The CHP leader dismisses the notion that his policy is unrealistic. “Why would you, as a person provided with social security, a regular monthly wage, a job in a factory, and security for yourself and your property in Syria, stay and work in Turkey for half the minimum wage?”

An organisation representing large companies including LVMH, Nike and Lego has ramped up its lobbying in the EU arguing that a key piece of digital legislation misses out on enforcing strong rules against counterfeit goods, writes Javier Espinoza in Brussels.

EU regulators are ironing out details of upcoming pieces of legislation aimed at Big Tech. The Digital Services Act, aimed at setting clear rules on how large online platforms should police the internet, is particularly in the spotlight because lawmakers cannot seem to agree on a position to defend before member states and the European Commission next year.

“It’s like everyone wants to put all the illnesses of the world in the DSA,” a lobbyist said.

Europe Express has seen a letter signed by TAC Alliance, an anti-counterfeiting group representing large companies, flagging several shortcomings they perceive in the upcoming legislation. “As they currently stand, the limited scope and content of several obligations would not sufficiently prevent illegal goods or services, such as counterfeit or unsafe goods, from reaching consumers,” the letter reads.

The current draft has a series of exemptions for smaller online platforms in a bid to shield them from unjustified costs, which TAC warns will be exploited to become a lucrative backdoor for the sale of knock-off goods.

“Not only is this provision based on the false assumption that they would not have the means to implement those measures, but we believe it is also unfair and unjustified to protect small and medium platforms, when the majority of EU SMEs are in fact brick-and-mortar shops?.?.?.?who particularly suffer from significant revenue losses due to the increasing number of illegal products being sold online.”

One country where this lobby has had an effect is France. Last month, the French government ordered search engines to ban Chinese ecommerce platform Wish from their result pages, due to the large number of unsafe goods allegedly sold on the website. Google, Apple and Microsoft complied and delisted the site from searches and app stores.

The world is full of hybrid situations?.?.?. and what we are seeing today at the border of Poland and Belarus is a typical example of that

Join us on December 7-9 at the Global Boardroom, where more than 100 speakers will discuss the challenge of building sustainable growth in a world transformed by crisis. Listen to and engage with leaders including the US Treasury secretary, the prime minister of Finland and a commissioner of the US Securities and Exchange Commission. Register free here today.

Recommended newsletters for you

Britain after Brexit — Keep up to date with the latest developments as the UK economy adjusts to life outside the EU. Sign up here

Are you enjoying Europe Express? Sign up here to have it delivered straight to your inbox every workday at 7am CET. Do tell us what you think, we love to hear from you: [email protected].