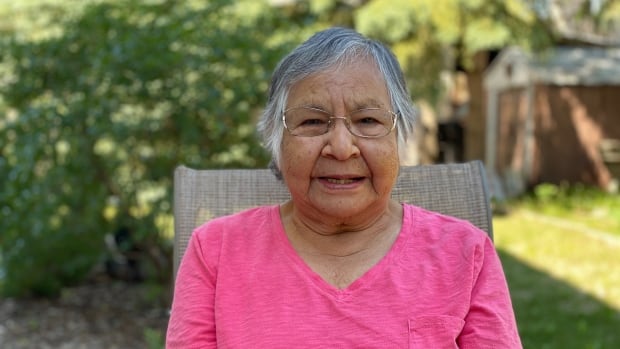 The survivor of Mary Val Indian Boarding School shared her story for the first time and said: “I tried to be strong

Phyllis Kretschmer has never shared her boarding school experience with anyone.

This active senior will turn 85 at the end of July. She and her cross-cultural grandmother are long-time advocates of Regina.

This time, Kretschmer left her experience in boarding school behind, because it was so painful, she took a step forward alone.

She was sitting on the back deck of Regina’s house, holding a small stack of newspapers with a front page photo of the old Marieval Indian boarding school.

In June, Cowessess First Nation leaders announced that 751 unmarked tombs were located on the old school site in Cowessess. Since then, memories of Kretschmer’s years at school have resurfaced.

From a happy home

In one of the old photos, Kreichmo pointed to the window of her old dormitory.

She closed her eyes tightly, determined to remember as many details as possible, and listed the details of the school, including the names of former classmates.

Although many of her stories are ugly, they are also full of historical tidbits: Pass system, India agent, Rations, Indian Hospital with Illegal ceremony.

In 1942, Kretschmer was like any other happy seven-year-old, excited about starting school.

“I was not taken there,” she said. “I only know that I have to go to school. I am happy to go. I am the oldest in the family.”

Born and raised in Kahkewistahaw aboriginal people, Kretschmer was taken to Marieval boarding school because it is the only boarding school nearby. Her family life is happy and healthy. She is loved not only by her parents, but also by her extended family, especially her grandmother Sophie.

Facts proved that the school was completely different from what she had imagined. This is a cold place without any heart. Punishment and humiliation are commonplace.

For six years, Kretschmer’s days have been filled with doctrinal questions and cleaning work. She said that the education part is almost non-existent, but she did learn to read and write.

“We have never understood our culture, and we have never been proud of who we are,” Kretschmer said.

Fortunately, she said that although the Federation banned Aboriginal ceremonies and all Aboriginal customs from 1885 to 1951, her grandmother took her to the ceremony and prisoners of war.

For a young child, boarding school is not only a lonely place, but also a terrible place.

Kretschmer still doesn’t understand how adults treat children so harshly. She said that the worst part of torture is never knowing why things happened, especially the extremely cruel punishment.

Kretschmer said that she is often used as an example, and she doesn’t know why.

She recalled that after the nun said nothing, she quietly asked to borrow a classmate’s eraser. As a result, she was sent to the “Guardian”, the girl’s supervisor.

Kretschmer said she received a strap on her hands and forearms.

“I tried to be strong,” she said. “I thought I could accept it.”

After the sling was hung on the goalkeeper’s rosary and broke, the beating stopped.

“The children cried because they saw me tied up,” Krechmer said. “I took care of it. I cried. But it was not enough to punish.”

She said she was forced to sit in the middle of the floor during the break for at least two days while the other children were playing.

“I feel hurt and embarrassed.”

We have never understood our culture, and have never been proud of our identity.-Phyllis Krechmer

Krechmer said the only thing worse than being punished is watching it happen to other children.

She recalled seeing a boy shave his hair in front of everyone as punishment for playing truant.

It is even more painful to witness an elderly relative being beaten naked in front of everyone. The anger on the face when the priest repeatedly beat her cousin was an unforgettable memory for Krechmer.

“I don’t know if she is menstruating or what’s going on, but there is blood on the floor,” she choked.

During the long months spent in school, she longed for the comfort of her family.

Kretschmer still remembers being sick at school. She was not sent to an Indian hospital, but quarantined. Her mother went to school to check on her, but they were not allowed to meet.

“I just want to hug her because I know that if I can hug her, I will get better,” she said. Instead, they waved from the window of her dormitory.

Kretschmer said that this is not a daily occurrence of violence, and the children will take time out to enjoy each other’s company as usual.

However, she said that her best memory was finally being able to leave school.

One day, her father showed up in the middle of the school year and said that she needed to help take care of her mother who had just given birth at home.

She said that she was very proud to see her father being so strict with the priest. Because she was almost 14 years old, the principal agreed.

She likes to be with her family and thinks that they helped her spend the time at school without losing her identity.

When Kretschmer was young, there was no work in the reserve, so she left and lived as a housekeeper and nanny until she met her husband in the late 1960s.

She raised her daughter in an environment without childhood experience and witnessed violence.

Hope for a better future

Visiting the old school grounds and listening to speeches by young leaders such as Cowessess Chief Cadmus Delorme gave her the power to share her story.

Almost everyone she knew when she was a student has passed away, so she felt it necessary to share her feelings as much as possible.

Kretschmer said that the school did not break her spirit, because with the help of her family, she would never forget who she was.

She knew that the past could not be changed, but she also said that she should not forget it.

Kretschmer wanted to know how much the situation today would be different if the school really provided education and if the people who managed the facilities treated the children well.

She hopes that the public’s new interest in boarding schools will bring about real and meaningful changes.

The Consecration of the Missionaries of the Immaculate Conception has operated the Marieval School for most of its nearly 100-year history, as well as many other boarding schools across the country. Oblates issued a statement on June 24, marking a “formal commitment” to “disclose rather than prevent access” to the records of all schools in which they participated.

“We are deeply sorry for our participation in boarding schools and the harm it has caused to indigenous people and communities,” The statement says.

Kretschmer said that today’s young people make her believe that they will build a better future because she says they are stronger, more educated, and more fierce.

“They are not afraid to speak.”