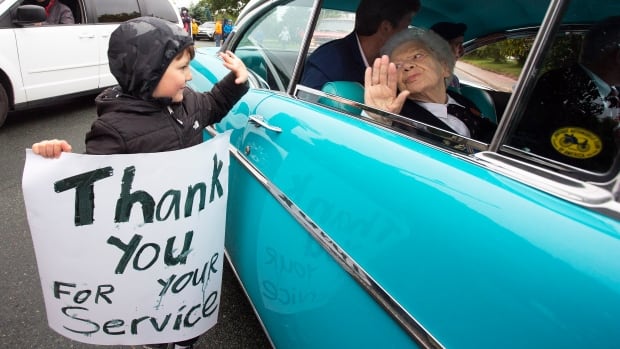 
According to the Royal Canadian Legion, there are only 80 World War II veterans left in Newfoundland and Labrador, but 12 were honored in St. John’s on Friday night.

It was one night. The convoy departed from the Caribou Memorial Veterans Pavilion across from Quidi Vidi Lake and ended at Branch 56 in St. John’s Pleasantville.

As each car passed by, dozens of people lined up, clapped and shouted “thank you”.

The Newfoundland Antique and Classic Car Club provides vehicles that allow every veteran to reach the venue in a stylish way. On either side of them are members of the Royal Newfoundland Police and the Canadian Commando Motorcycle Club as their escorts.

“They are very grateful. We are very happy that the veterans let us know through the roll call,” Jenn Deon, secretary of the 56th Division of the Royal Canadian Legion, told CBC News.

“Before you made the call, you didn’t know how many veterans there were. In fact, we had about 25 veterans who identified themselves to us, and only about half of them were willing to participate.”

The 12 veterans at the military parade ranged in age from 95 to 102 years old.

The group is composed of men and women, and they have served in the three branches of the army, navy, and air force.

The event was held the day after Newfoundland and Labrador Memorial Day to commemorate the people who fought and died in France during the First World War.

For Deon, the evening is special.

Her father Rod Deon was one of the veterans who received honors on Friday night, but he is also 100 years old. Rod Deon is a veteran of the Royal Canadian Navy and participated in the Normandy landing in 1944.

“He was the inspiration for this event for me. It is important to remember his sacrifice and people like him,” Deon said.

The heroic quilt gave a speech to the veterans who attended And the crow’s nest organization.

Armed sergeant Leonard Stoyles of Unit 56 said that this day was to pay tribute to the remaining World War II veterans.

“We don’t have too many veterans, so we are trying to make the most of it,” he said.