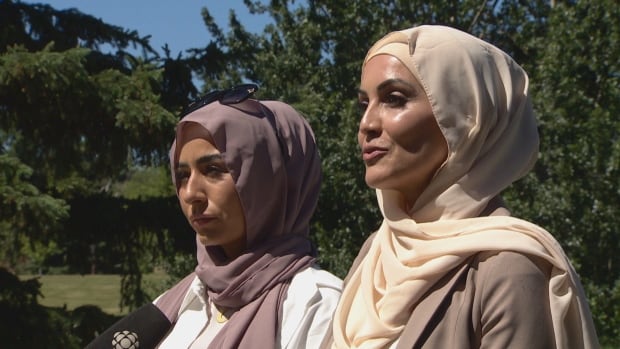 After the recent attack in Alberta, Muslim women call for increased protection


Nesrine Merhi-Tarrabain no longer feels safe in St. Albert, Alta, the city she has called home for more than a decade.

As she crossed the edge of Aldwood Park, she felt a new sense of fear. Even side by side, Merhi-Tarrabain and her friend Houda Alkasm felt unsafe.

“It’s probably me, or my sister or my friend,” Merhi-Tarrabain said on Friday. “Recently, I’m really scared, I always have to look back.”

Merhi-Tarrabain said that the recent attacks on Muslims made her more and more frightened. She no longer walks alone. She is now afraid of going to the grocery store without a man.

She said: “I don’t think this should happen to any Canadian. We are afraid to go out because we don’t know if we will be attacked because of our religion, skin color and dress.”

“This [St. Albert] The attack took place in broad daylight, and it happened very close to home. ”

Muslim women in Edmonton came out Friday to condemn hatred of women wearing hijabs for fueling attacks — and the fear and anger they are fighting with. 1:54

The RCMP is investigating the attack as a hate-motivated crime. Alkasm said it reminded people that wearing a headscarf would make her a target of hate.

“It’s very scary,” said Alkasm, who lives in Edmonton. “It’s scary to not enjoy something as simple as a walk in the park. We have to think twice before acting.”

The St. Albert attack occurred around 12:30 pm on Wednesday. A woman was pushed to the ground by a man shouting racial discrimination, unconscious. Then he drew a knife and pressed another woman to the ground, the blade against her throat.

One of the women was taken to the hospital without life-threatening. The second woman suffered minor injuries.

As of Friday afternoon, the Royal Canadian Mounted Police continued to search for the suspect, who was a white man in his 50s.

Wednesday’s attack occurred when a Muslim family was Was killed in London, Ontario.

According to reports, Edmonton has recently had several attacks on Muslim women, including earlier this month a Somali Canadian woman wearing a headscarf was allegedly grabbed by the neck and pushed onto the sidewalk.

Wednesday’s attack once again called on the government to take decisive action to resolve the issue of anti-Muslim hatred. It was condemned by politicians, including the Mayor of St. Albert and the Minister of Justice of Alberta.

Governor Jason Kenney described Friday’s incident as “deeply disturbing” and said the crime was part of a “pattern of violence” against Muslim Albertans.

“This is not our identity as Albertans,” he said. “Alberta is a hospitable society and it must be a safe place for everyone.”

The words of the politicians have little meaning to Nida Farouki, who grew up in Edmonton. She wore a headscarf, worried that she might become a target.

“These mourning words and passive statements… When I was out alone, these statements did not help me in any way,” she said. Farooqui called for harsher punishments for hate crimes.

“If you are waiting for someone to be killed, it has already happened. Then why are there no actual concrete legal measures and emergency actions?

“These words are enough. We need action.”

Trent Daley, a Muslim community activist in Edmonton and Alberta director of the Canadian Anti-Hate League, said the province was too complacent about the recent attacks.

He said the government should set up a non-partisan committee to combat anti-Muslim hatred and provide more funds for community organizations that combat hatred.

Daley plans to attend an anti-hate rally on Friday night in Churchill Square in Edmonton to express his solidarity with the targeted sisters.