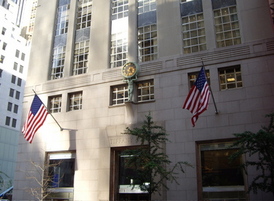 New York – A man was caught on surveillance video walking out of a Tiffany & Co. store with two stolen necklaces. As reported by Good Morning America, the suspect is now wanted for grand larceny after taking the necklaces worth an estimated $100,000.

The suspect reportedly walked out of the store after talking to an employee who was behind the jewelry counter, leaving after the employee turned away.

A Tiffany & Co. spokesperson is quoted in the report as stating that the company “is fully cooperating with the authorities, and as this is an ongoing investigation, we cannot comment any further.”

As noted in the report, authorities are still trying to determine whether the theft was linked to organized crime or whether the suspect acted alone. Individuals who may have information about the incident are being asked to call the NYPD’s Crime Stoppers Hotline at 800-577-TIPS, or visit NYPDCrimeStoppers.com to submit a tip.