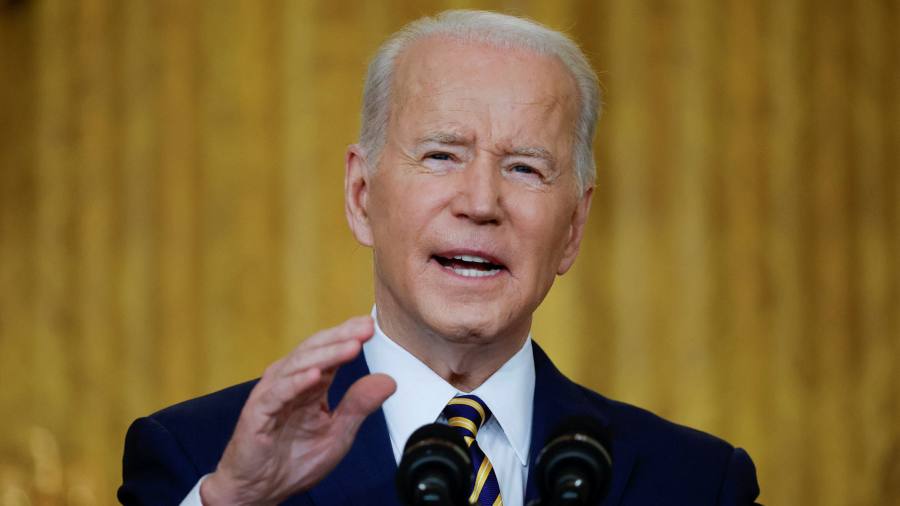 
Joe Biden has backed the Federal Reserve’s move to tighten monetary policy to fight inflation, as the U.S. president held his first official news conference in months, vowing to rein in high prices that are weighing on the economic recovery.

“Given the strength of our economy and the pace of recent price increases, it is appropriate as Fed chair [Jay] Powell said to realign the support that is necessary now,” Biden said, adding that he supported the independence of the central bank.

Biden faced the media on Wednesday afternoon in an attempt to market his achievements and battle dwindling public approval on the first anniversary of his inauguration.

His White House news conference came as the president faced several crises at home and abroad, including lingering coronavirus pandemic, sharp rises in consumer prices and the ongoing threat from Russia aggression in ukraine.

“Despite all this progress, I know there’s a lot of frustration and fatigue in this country,” Biden admitted. The president said a protracted pandemic would be “unbearable” for many. But he added that the White House was doing its best to address the issue, countering accusations that his administration had underestimated the proliferation of Omicron variants.

In terms of inflation, Biden directly pointed out that the Federal Reserve is the institution most directly responsible for high prices. But he also said a stalled White House economic plan in Congress and a more aggressive approach to competition policy would help control the problem.

The latest Gallup poll found that 40 percent of Americans approve of the job Biden is doing, while 56 percent disapprove. That compares with Donald Trump’s 38% approval rating after a year as president, while Barack Obama’s 49% approval rating at the same time in his term.

Democrats worry that low approval ratings could spell disaster for their party in this year’s midterm elections, when control of both the House and Senate are up for grabs. Biden’s party currently controls both houses of Congress by a narrow margin.

The news conference marks his first major appeal to the American public in 2022. The president’s State of the Union address is scheduled for a relatively late March 1st date.

Biden began his presidency with broad public support, but his approval ratings began to slip over the summer with the chaos of a troop withdrawal from Afghanistan, testing the country’s alliances overseas and creating a stigma in the eyes of many Americans. Doubt.

More recently, the White House has struggled to get a strong handle on the economy with rising gasoline prices and record oil price hikes. inflation. The latest official data showed that US consumer prices rose at the fastest pace in nearly 40 years in December.

Supporters argue that Biden and the White House have so far failed to effectively market their achievements, including a $190 million Covid relief bill and sweeping 1.2 ton infrastructure package.

Rana Foroohar and Edward Luce discuss the biggest themes at the intersection of money and power in American politics every Monday and Friday.Sign up for the newsletter here