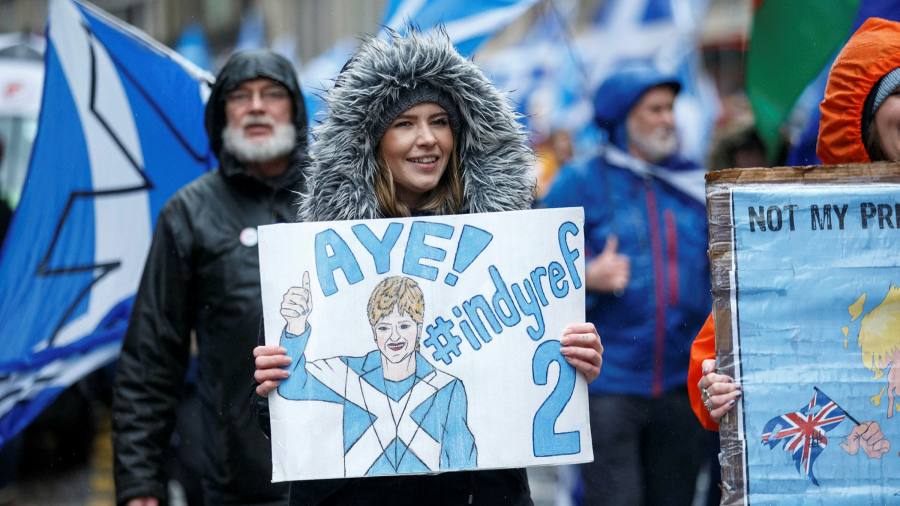 British “Financial Times” this week and Border Book Festival, Held at the home of Sir Walter Scott, Abbotsford, Scotland. Discuss Scottish currency issues with my colleagues Mure Dickie and Gavin Jackson: What currency arrangement should a potential independent Scotland choose? (You should look at Gavin’s new book One lesson, one money.)

Currency is one of the toughest questions in the 2014 Scottish referendum debate, and many people believe that the pro-independence movement did not give a good answer. If and when a new referendum will be held, this question will become prominent again. As with the wider economy, the greater the risk of serious problems with the independent Scottish monetary system, the more likely many people will choose to stay in the UK.

The hint we discussed was An article by Sir John Kay, Warned not to stay away from the pound. Of course, the challenge of transformation is huge. In today’s deeply integrated cross-border financial system, there is no precedent for allowing a part of an advanced economy to exchange for a larger currency. (When EU countries adopt the euro, their national currencies will be fully converted. The split of Scotland will leave the pound in place.) If citizens and companies want it, it is difficult to prevent them from using the pound in private transactions. The decision whether to convert existing assets and liabilities from the pound sterling to the new currency—and if so, which ones—will inevitably disappoint some people.

My contribution to the discussion is to examine the Nordic countries, which Scottish nationalists sometimes use as models of independent Scotland. What is striking is that each country offers a different EU Union and currency system. Norway is not in the European Union but in the single market and has its own floating currency. Sweden is a member of the European Union and has its own floating currency. Finland has joined the Eurozone. As a member of the European Union, Denmark has opted to withdraw from the Eurozone, but has been pegging its currency to the Deutsche Mark and then to the Euro for nearly 40 years.

What does this show? I think three things.

First, almost any monetary arrangement is compatible with a well-functioning, open, productive, and socially cohesive economy. But this also presupposes that the economy is actually functioning well! The Nordic countries have shown a high degree of political stability, responsible decision-making and sound public finances. When these are guaranteed, a country can flourish under a series of currency systems. On the contrary, when they are lacking, each currency system may encounter problems. Therefore, more important than the monetary system itself is an independent Scotland’s credible commitment to good economic management.

(Perhaps the Danish-style pegged exchange rate may be particularly fragile because it is very difficult to maintain a fixed exchange rate in the face of capital flight. In fact, the Danish central bank has to adapt to capital inflows during difficult times, which means that among other things, it has become the first to introduce negative interest rates. One of the countries. But for most small economies, of course for a newly independent and exposed economy like Scotland, the choice is really to choose between its own floating currency or joining a currency union and others.)

None of this has changed the fact that establishing a possible new regime is full of challenges. If anything, it emphasizes that reaching any of these destinations safely must be based on prioritizing long-term economic policies and trustworthy public finances. There is no shortcut to populism.

Second, if any of these monetary systems can work for a well-functioning economy, joining the currency union should be considered a serious choice in particular. To put it mildly, this is not always British (or American) conventional wisdom.

After the euro crisis, People often say A small troubled country needs the freedom to depreciate. In the recovery after the global financial crisis, Ireland (in euros) is at a disadvantage compared to Iceland (a floating currency).But one Take a closer look at Iceland Shows that there is nothing to be enviable: its currency collapse has greatly reduced the effective income of Icelanders, but it has not made their exports better than Ireland.

More generally, small economies Endure more pain The gains from exchange rate fluctuations, not from the assumed currency independence, which is largely illusory in the world of financial integration. (I think even the UK can benefit from joining the euro.)

This leaves the question of whether the correct currency union for independent Scotland is the British pound or the Euro. At least we can say-this is my second thought-a formal currency union is definitely better than informal use of another country’s currency. Therefore, part of the choice of currency will depend on the prospects of the formal pound union and EU member states. On the one hand, I find it hard to imagine that a newly independent Scotland will have a more formal say in the Bank of England’s monetary policy than it would be part of the United Kingdom.

The answer is of course determined by the independent Scottish people. But in my opinion, part of the motivation for choosing independence is the desire to have different economic (and other) connections. If so, then a referendum to get Scotland out of the UK will put it on a path that ends with the euro.