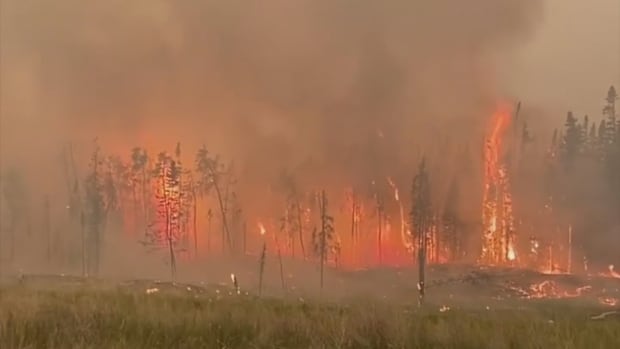 Some wildfire evacuees returned to northeastern Manitoba, but more than 2,000 people are still in trouble


Evacuees from Red Sucker Lake First Nation in northeastern Manitoba began returning home on Monday after escaping the wildfire, but more than 2,000 people from four other indigenous people were still trapped.

The Canadian Red Cross, which coordinates flights, said that about 200 community members living in Winnipeg and Brandon will return home by Tuesday.

People from Red Sucker Lake Arrived in the south about four days ago.

There are still more than 2,000 people evacuated from Pauingassi, Little Grand Rapids, the Belens River and the Aboriginal people living in hotel rooms, and they are not sure when they will return home.

Ronnie Duck lives in downtown Winnipeg, waiting to return to his home in Bloodvein, about 250 kilometers north of the provincial capital.

“I keep asking everyone,’When can we go home?’ So far, no one has told me anything,” he said.

According to the Red Cross, there is no timetable for when the other four indigenous people will return.

Bloodvein Councillor Ellen Young said it was fine and fine early Monday, but then the wind changed.

“We were covered in smoke again and it was thick. I hope,’Oh, everything goes well. Maybe our people can go home.’ But this is not the case,” she said.

“It’s difficult because I know people miss home, I know children miss home, but I would rather they feel bored and safe there than having breathing problems here because there is no one in the nursing station,” she said.

The Manitoba Wildfire Bureau stated in a press release on Monday that there are currently 128 active wildfires in Manitoba and 10 new wildfires have been reported over the weekend.

Young said there were two people who were affecting Bloodvein at this time, and the smoke was worse than when people left a week ago.

Recently there was a thunderstorm, which brought light rain, but lightning caused another fire.

“I keep saying that I want people to pray for rain because we simply don’t have enough rain to put out the fire.”

However, there is some good news, because Manitoba Hydro said it has restored electricity supply to three communities where wildfires destroyed hydroelectric lines.

Scott Powell, a spokesman for the utility company, said that the Aboriginal people of the Bloodline, Behrens and Aspen Rivers all restored electricity on Sunday night.

However, Paungassi and Little Grand Rapids still have no power. Powell said the fire in the area meant that staff could not get close enough to estimate the recovery time or calculate how many utility poles were burned.

“The fire did occur near the lines that serve these communities,” he said.

“Resumption work will have to wait until the area is safe.”

Day camps let the kids have something to do

It is very challenging for families to be trapped in hotel rooms. Jackie Anderson said he is coordinating day camps for children evacuated through Ma Mawi Wi Chi Itata Center, an Aboriginal community service organization based in Winnipeg. It is one of many groups that have joined forces to help.

She said that the purpose of the camp is to keep the children busy and involved, because “displaced from their community, I don’t know if you have a community to go home.” “Now is just a very painful time.”

She said that many children are talking about The dogs and cats they had to stay.

Anderson said that Ma Mawi Wi Chi Itata is working with evacuees from four aboriginal people at 17 hotels in Winnipeg.

Every day, children are picked up by school buses and taken to parks, zoos and beaches.

“Just let them leave the hotel room, because of course they can’t be allowed to walk around in the hotel just because of the strictness of the COVID… Some of these families have five or six children. I can’t imagine them being suppressed like that and having nowhere to go ,”she says.

Watch | “When can we go home?” The evacuees are in trouble:

Evacuees from Red Sucker Lake First Nation in northeastern Manitoba began returning home on Monday after escaping the wildfire, but more than 2,000 people from four other indigenous people were still trapped. 1:57