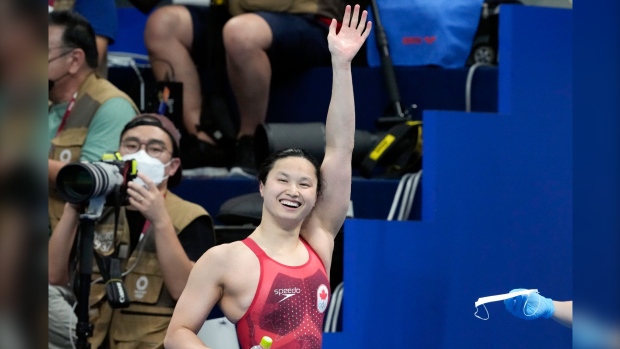 The defending world champion of the women’s 100m butterfly completed the second half of the race at the Tokyo Aquatic Center on Monday.

Ranked seventh at the 50-meter turn, McNeill won the race in 55.59 seconds, the third fastest time in the history of the race.

“This is more than I had hoped at the time,” said the 21-year-old man from London, Ontario. “I really just want to enjoy the experience and have fun, I think I did it today.

“So I’m really proud of it, just try not to be so nervous, just try to relax, this is when I am really at my best condition.”

The Canadian player defeated the Chinese player Zhang Yufei by five percent of a second. Emma McKeon of Australia won the bronze medal.

On the opening day of the final, she was also the first Canadian to win multiple medals in Tokyo after winning the silver medal in the freestyle relay with Oleksiak, Kayla Sanchez and Rebecca Smith.

Mac Neil didn’t know that she had caught Butterfly Gold when she hit a wall. She wears glasses outside the swimming pool, but she does not wear contact lenses while swimming.

McNeill squinted at the scoreboard to see her results, and then exclaimed, “Oh, my goodness.”

The products of the London Aquatic Club have a strong underwater teeing ability, but it is no stranger to win in a negative point match.

“I usually don’t go out so quickly,” she explained. “I need a little more time to start. The second 50 is always my best position and where I feel most comfortable.”

“Entering the field behind the goal is difficult in many ways, which I didn’t expect,” McNeill said. “When I entered the world, I was relatively unknown, so I have this advantage.

“Starting with the expectation that I want to do a good job for myself, my family, friends and teammates at home, I think the increased pressure will only make it more challenging.”

World record holder Sjoestroem broke his elbow when he fell on the ice in February and finished seventh on Monday.

Toronto’s Summer McIntosh is only 14 years old and is the youngest athlete on the Canadian Olympic team, ranking fourth in the women’s 400m freestyle.

“This is definitely just the beginning for me,” the teenager said. “It is surprising that I can have this experience in the next few years.”

Standing in the media interview room watching the Mackintosh game on TV, McNeill repeatedly urged her roommate in the athlete village to “go on.”

Kylie Masse, the world champion backstroke champion from LaSalle, Ontario, advanced to the 100m final as the second fastest in the semifinals. The final is on Tuesday morning local time, but on Monday night in Canada.

As a two-time NCAA champion and training under the guidance of Rick Bishop at the University of Michigan, McNeill returned to Canada in early April and underwent a two-week mandatory quarantine under COVID-19 restrictions.

Subsequently, she joined the Ben Titley training group at the Pan American Sports Center in Toronto.

“I am really worried about the outcome, switching so close to the Olympics and trials, but the result is the best. I am very satisfied with this decision,” she said.

In the 2016 Rio Olympic trials, McNeill ranked sixth in 100 butterfly strokes. She watched the 16-year-old Oleksiak win the silver medal and the freestyle gold medal in her competition, thinking “I am the same age as her”.

“I kind of forgot where I was, but I remember when Penny won the gold medal,” Mac Neil said. “This is the first gold medal won by the Canadian swimming team in a long time. I am truly honored to be able to add to this legacy.”

When she returned to Canada, she was looking forward to getting the Olympic rings tattoo. McNeill doubted that her mother, Susan McNair, would give up her previous reservations.

“She didn’t like it, but as a doctor, she emailed every doctor to find out the cleanest place in London,” McNeill said. “You can bet that when I go home, I will get one.”

The Canadian Press report was first published on July 26, 2021.