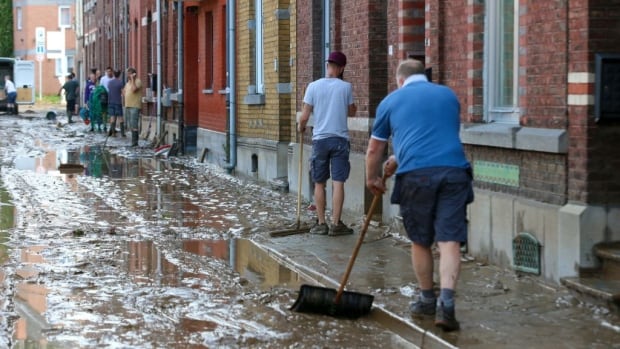 
After the worst flooding in decades in the Belgian town of Dinant the previous day, it was being cleared on Sunday. The streets were turned into torrents, washing away cars and sidewalks, but no one was killed.

After the flood, there was a two-hour thunderstorm, and the streets were littered with rubble, destroyed cars and thick mud.

Dinant survived the deadly flood 10 days ago, which killed 37 people in southeastern Belgium and many more in Germany, but the violence of Saturday’s storm surprised many people.

“I have lived in Dinant for 57 years and have never seen anything like this,” Richard Fornox, the former mayor of the small town on the Meuse, said on social media.

The rain gushed from the steep streets, washed away dozens of cars, piled them at crossroads, washed away cobblestones, sidewalks and the entire apron. Residents watched in horror from the windows.

According to a report by the Belgian TV station RTL, there was no accurate estimate of the loss, and the town authorities only predicted that it would be “significant.”

“In less than 20 minutes, the water rushed down from here, from above, and then gradually became larger. It turned into a torrent, and the torrent took all the cars away,” said local resident Pierre Colo.

Another resident, Andy Martinez (Andy Martinez) described the damage caused to his home by the floods.

Martinez said: “Water poured in from my living room and here, the cellar, and my two holes in the alley. Everything poured in, everything was washed away.”

As officials visited the devastation caused by deadly floods in Germany and Belgium, experts pointed out the role of climate change in the heavy rains that caused the floods. 1:59

Wallonia, the French-speaking region of Belgium, was hit by floods again after 37 people were killed in a flash flood in just a few weeks.