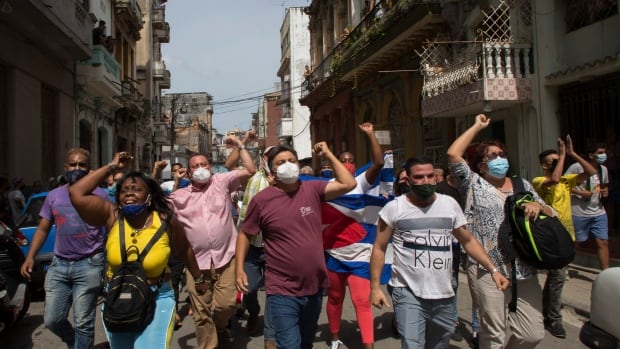 The House of CBC Radio: Canada in a Changing World

CBC News: House of Representatives47:45Canada in a changing world

In this week’s program: Canadians in the tourism industry talk about reopening and recovery. A panel of members of Congress discussed Canada’s foreign policy, including relations with Cuba, Haiti, and China. A critic and supporter of the Cuban government debated the unrest in the country. In addition-two election experts discussed the ongoing crisis of the Federal Green Party, including who would benefit from ticket evasion. 47:45

Next month, Canada will welcome foreign tourists for the first time in more than a year, and international flights will be allowed to land at five other airports across the country.

This is good news for the country’s hard-hit tourism industry, but for some people, it’s not ideal-including Saskatchewan Tourism Minister Jeremy Harrison (Saskatchewan) Province’s airports are not on the list of facilities approved to receive international flights).

The House of Representatives consulted two tour operators: Barb Genge, the owner of Tuckamore Lodge and the mayor of Main Brook on the northern peninsula of Newfoundland; and Barry Carriere, owner of Jim’s Camp Outfitters in Cumberland House in northeastern Saskatchewan.

Starting next month, Canada will welcome international flights to five other airports, a move that will increase tourism in certain areas of the country, but not all. Tour operators from provinces excluded from the list also participated. 9:09

There are signs of political turmoil in Cuba, with demonstrators taking to the streets to protest the economic downturn and lack of political rights. The Communist government and its supporters blamed foreign influence and the U.S. embargo on Cuba, while critics of the government believe that political reforms are needed.

What is the way forward-can Canada play a role? Michael Lima Cuadra of the Cuban Democratic Transition Committee and David Thomas of the Canada-Cuba Friendship Association discussed with guest host Evan Dyer.

When the protesters took to the streets of Cuba, supporters and opponents of the Communist government were discussing the reasons behind the riots and Canada’s role. 14:02

How is Canada performing on the world stage?

With the widely expected federal elections to be held later this summer, several foreign policy issues have emerged in recent weeks. After the assassination of the President of Haiti, large-scale protests broke out in Cuba. The nature of Canada’s relationship with China is one of the biggest problems facing this country.

Three MPs-Rob Olivent of the Liberal Party, Michael Chung of the Conservative Party and Jack Harris of the New Democrat Party-joined House Discuss their party’s views on these issues and how they are adapting to the upcoming election campaign.

CBC News: House of Representatives15:03How is Canada performing on the world stage?

Members of the Liberal Party, the Conservative Party and the New Democratic Party and the guest host Evan Dyer discussed Canada’s foreign policy response to the situation in Haiti, Cuba and China. 15:03

Who benefits from the chaos of the Green Party?

The truce between Federal Green Party executives and leader Annami Paul seems to be over. The party and its related funds have taken the fight against Paul to court-this is the latest development in a series of internal struggles.

So, what does the ongoing controversy mean for their vote numbers, and if the Green Party loses support before the possible federal election, which parties will benefit? Eric Grenier of The Writ and David Coletto of Abacus Data provided their views.

CBC News: House of Representatives6:44Who benefits from the Green Party?