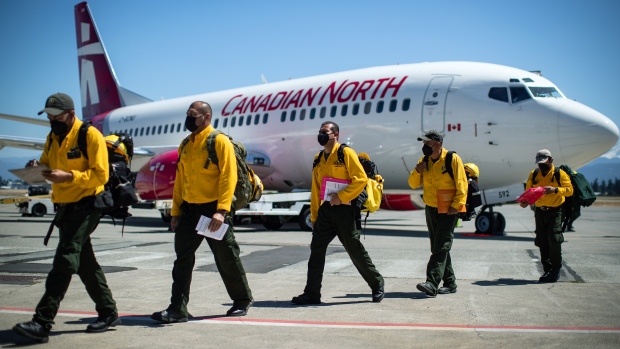 
Vancouver-British Columbia welcomed about 100 firefighters who arrived from Mexico on Saturday to help extinguish the devastating wildfires that raged across the province.

“These well-trained staff will be on site for 30 days, working side by side with our wildfire service personnel,” said Mike Farnworth, the Minister of Public Safety and Attorney General of British Columbia.

On Saturday morning, Farnworth spoke at a press conference on the tarmac of Abbotsford International Airport, thanking the firefighters and the Mexican government for their help.

He said that the staff will be put into work as soon as possible.

Farnworth said: “After customs clearance, they will go to a nearby aerial tanker base to conduct a rapid COVID-19 test and meet with representatives of the British Columbia wildfires and the Mexican Consulate.

On Friday, some wildfire ground crews from the Canadian Army arrived in Vernon to report and accept their mission. Another 350 people came to British Columbia later this week.

According to the province Wildfire Dashboard, There were 259 active wildfires in BC on Saturday.

“In the long run, we will definitely break some records this year,” said Karley Desrosiers, information officer for the British Columbia Wildfire Bureau.

“As of yesterday, since 1950, we were ranked in the top five in terms of maximum hectares burned.”

So far, this wildfire season, about 400,000 hectares of land have been burned, and if there is no rainfall, this total seems likely to increase.

Desrosiers said: “We are likely to be a record-breaking year for drought conditions this year.”

There was no rain on the way, but unfortunately there was lightning in the forecast, and the province has seen a lot of lightning this year.

Desrosiers said: “So far, the number of lightning strikes we have suffered is much higher than any one we have actually seen, especially in recent years, and the number of consecutive days.”

Desrosiers said: “We have 113 firefighters from Quebec who will go to the Okanagan complex, the Flat Lake fire, where we are still seeing moderate to high levels of fire.”

The fire was out of control, covering an area of ??more than 32,000 hectares.

‘One in and one out’

Katie Pasitney works on a ranch surrounded by wildfires.

“We are now one in and one out,” she told Vancouver CTV News. “Our biggest threat right now is drought. There is no end in sight. There will be no rain in the next 7 days, high temperatures will come.”

pasture– Universal Ostrich -Located in Edgewood, about an hour and a half east of Vernon.???

“We have 500 birds here, which many people cannot understand, but you can’t load 500 birds as easily as 500 cows,” Pasitney said. “Towing these animals at such high temperatures will also put a lot of pressure on them.”

She and her family, who ran the ranch, planned to stick to it. Although their area was under an evacuation order, they stayed where they were.

Evacuation orders are downgraded near OSOYOOS

Elsewhere, the evacuation order issued by the Osoyoos Indian Band has been Downgrade to alert, Including Spirit Ridge Resort.according to A Facebook post, The resort is opening its doors to wildfire personnel, allowing them to stay there while fighting the Nk’Mip Creek fire.

Desrosiers told CTV News that the fire was still growing, but not as fast as it was shortly after the ignition.

“All of this happened in four days,” said Sue McKortoff, the mayor of Osoyoos. “We are all nervous.”

She said that Saturday morning was smoky, but by noon the sun had begun to shine. The evacuation center in the area is located in Oliver.

For tourists to the area, the mayor said that there is no reason for those already in the city to leave early, but those planning to travel to the area should plan ahead.

“Please do your homework first,” McCourtoff said. “Check the access roads through DriveBC, because there are many roads closed.”

She thanked the international support that arrived later on Saturday.

“Our firefighters are exhausted,” McCortoff said. “They must be heroes.

The good news: So far, the number of man-made fires this year has been quite small.

“Generally speaking. In any year, we have about 40% to 60% of human factors,” Desrosiers said. “Of the currently burning fires, we believe that about 5% are caused by humans.”

A sort of GoFundMe page Has been established to help ensure that Universal Ostrich can afford the feed and resources to sustain its birds.