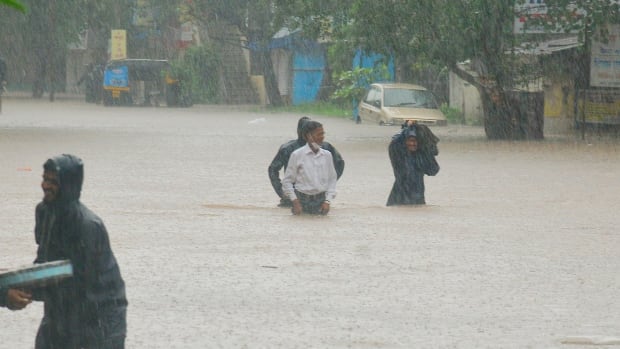 
Officials and news reports said on Friday that landslides and floods caused by monsoon rains have hit parts of western India and killed more than 100 people. More than 1,000 people were trapped by the flood and rescued.

According to regional collector Nidhi Chaudhary and state government official Sagar Pathak, the dead included 54 people killed in four landslides in Raigad and Ratnagiri districts in western Maharashtra on Thursday and Friday.

Chaudhary said that many of the rescued people were trapped on the roof and even on the bus on the highway.

Patak said more than 30 people were missing after the landslide.

Chaudhary said the rain has slowed down, but due to Friday’s high tide, the water level rose again. However, rescuers have reached the worst-hit areas.

During the monsoon season from June to September, disasters caused by landslides and floods are common in India, when heavy rains weakened the foundations of normally poorly constructed buildings.

According to the Press Trust of India, houses in the Satara area collapsed or were washed away by floods, resulting in 27 deaths.

It also stated that, according to reports, more than 20 people died in the eastern part of Gundia and the Chandrapur area.

Prime Minister Narendra Modi said he felt pained by the loss of life.

Modi said on Twitter: “Due to the heavy rain, the situation in Maharashtra is being closely monitored and assistance is provided to those affected.”

He was deeply distressed by a landslide in Raigad, Maharashtra, causing loss of life. I express my condolences to the family of the deceased. I wish the injured a speedy recovery.

The situation in Maharashtra due to heavy rain is being closely monitored and assistance is provided to those affected.

Fire officials said that elsewhere, a house in the Shivaji Nagar district of eastern Mumbai collapsed after heavy rain on Friday, injuring at least four and eight others.

In Ratnagiri district, after heavy rains, 200 people were rescued from hilly areas on Thursday.

Ratnagiri district administrator BN Patil said that in the coastal town of Chiplun with 70,000 people, more than half of the area was flooded.

The Department of Defense stated that the Army, Navy, Coast Guard and National Disaster Response Force are assisting in rescue operations.

A statement from the Indian Navy stated that it deployed helicopters to evacuate stranded personnel and dispatched rescue teams and ships to the area.

Authorities issued an alert in the southern state of Telangana on Friday. Heavy rains caused flooding in Hyderabad, the capital of the state, and other low-lying areas.

Meteorologists said that so far this month, the rainfall in Hyderabad, one of the Indian Information Technology Centers, has reached 30 centimeters, the largest July rainfall in 10 years.

The gate of Osman Sagar, one of the main reservoirs, opened for the first time in ten years to discharge excess water.

Last weekend, the monsoon rains in Mumbai, the financial and entertainment capital of India, and its surrounding areas triggered landslides and killed more than 30 people.

The monsoon is vital to the rain-fed crops planted in the current season, but rain usually causes widespread damage, killing dozens of people every year.

Experts say that the heavy rainfall on the west coast of India is consistent with the changes in rainfall patterns that have occurred in the region over the past few years due to climate change.

“The frequency and intensity of heavy rains have increased,” said Roxy Matthew Cole, a scientist at the Indian Institute of Tropical Meteorology in the western city of Pune.

He added that the warming Arabian Sea is driving more cyclones and more intense rainfall in a short period of time.

“Every year we need to be prepared on the West Coast,” he said.