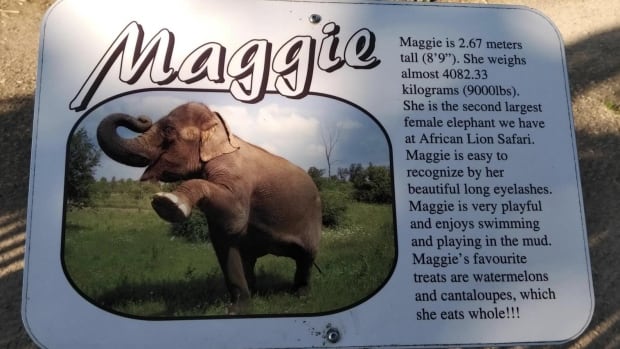 African Lion Safari ended elephant rides after 2019 attack. So why are they still allowed in Canada?

Born in Burma, the Asian elephant was ridden for 25 years by visitors to African Lion Safari, a zoo and theme park in Flamborough, Ont., in rural Hamilton.

But on June 21, 2019, Maggie lunged at her handler as the last rider was dismounting.

Now, CBC News has obtained an Ontario Ministry of Labour report that sheds light on what exactly happened during the last-ever elephant ride at African Lion Safari.

Activists and zoo accreditation bodies believe African Lion Safari was the only site in Canada offering elephant rides. The ministry investigation raises questions about why such rides are still permitted by Canada’s Accredited Zoos and Aquariums (CAZA), even though they’ve been banned for a decade by the leading U.S. zoo accreditation association.

According to the 117-page report, which is heavily redacted in sections, Maggie “became aggressive and began attack … by using her trunk [to] repetitively hit, spin and push the handler against the wooden railings of the platform stairway behind him.”

A ministry inspector found that as the handler fell to the ground, Maggie pushed him into a corner. He crawled under the massive animal, clambering to safety. But he was left seriously injured, with his head bleeding.

CAZA, a private charitable organization that accredits and represents zoological parks and aquariums, is reviewing its policy on elephant rides, according to its executive director.

African Lion Safari refused CBC’s request for an interview, but said in a statement the zoo permanently stopped elephant rides in 2019.

Ending elephant rides was welcomed by World Animal Protection, which had been calling for their halt. But Canadian campaign director Melissa Matlow wonders why it took a “tragedy” to make the change.

“Had a decision been made to end elephant rides and shows long before, this [2019] incident could have been prevented.”

Animal welfare rules vary across Canada, with a patchwork of provincial regulations.

The Ministry of the Solicitor General inspects most zoos and aquariums in Ontario, but says African Lion Safari falls under the Animals for Research Act (ARA), which is overseen by the Ministry of Agriculture, Food and Rural Affairs.

Under the act, inspectors ensure animal care, welfare and handling standards are met, but “the ARA does not prescribe or regulate the kinds of interactions people can have with animals,” spokesperson Christa Roettele said in an email.

Instead, zoos turn to CAZA for those standards, which have long allowed elephant rides. African Lion Safari was a founding member and displays the CAZA logo on its website.

The charity represents 28 facilities across Canada, and the Canadian Food Inspection Agency, which is involved when animals are transported to the country, recognizes its policies, according to CAZA executive director Jim Facette.

CAZA’s standards are also recognized by British Columbia and Saskatchewan, but not Ontario, he said.

Despite the ministry’s findings, Facette disagreed with its characterization of the incident.

CAZA’s policy for using animals in educational programming says members should strive to treat animals with dignity and in a way that shows their “natural intellect … and physical attributes, while operating in a way that’s safe for the animal, visitors and handlers.”

But it also lists animal rides as “appropriate educational programming.”

CAZA’s American counterpart, the Association of Zoos and Aquariums (AZA), hasn’t allowed any of its 241 accredited facilities to offer elephant rides since 2011.

Six of those sites are in Canada, including the Calgary Zoo, Toronto Zoo and Vancouver Aquarium.

“It was dangerous,” said AZA CEO Dan Ashe of the rides. “We had significant record of injury, and in some cases death, associated with elephants, and so the principal concern was with the safety of elephant care professionals.”

Instead, the AZA calls for protected contact — there must be a barrier between guests and elephants at all times. Even trained handlers can only be in the same space as an elephant in specific circumstances.

“Elephant rides and things like that are an artifact of the past,” said Ashe.

WATCH | The AZA explain why it banned elephant rides among its members:

Dan Ashe, CEO of U.S.-based Association of Zoos and Aquariums, speaks about why his group banned elephant rides in 2011. 1:14

Zoos should not be “presenting [animals] as some kind of entertainment that should be performing for us,” added Ashe.

Asked why CAZA continues to permit elephant rides, Facette said that when AZA made its decision a decade ago, “circumstances at the time were probably different here in Canada.”

African Lion Safari has a “high degree of expertise” around elephants, he said.

“There was a period of time where it was felt what’s being done is fine, there is not a lot of incidents, not a lot of facilities that have these kinds of situations,” said Facette. “Then an accident did happen and we recognize that.”

Maggie is not the first elephant involved in an attack at African Lion Safari.

A handler named Omer (also referred to as Omar) Norton was crushed and died in November 1989 when Tusko, an 18-year-old bull elephant, used its head to pin the man to the ground. At the time, media reports said Norton was trying to break up a fight between two elephants.

Tusko had a history of aggression toward animals, but not people, then co-owner Don Dailley told reporters.

“It’s been known to happen,” he was quoted as saying in a Nov. 14, 1989, newspaper report. “Elephants have also been known to swing their trunks and to gore people. They are potentially very dangerous animals.”

Maggie is described in the ministry investigation as “old” and in her early 50s. She was transferred to African Lion Safari from Florida in May 1990.

A medical profile in the report calls her “overall physically healthy” for her age. An assessment after the incident appeared “completely normal.”

The rides were an opportunity for guests to “get up close” with elephants, the ministry inspector said.

Five days a week, the elephant, carrying a visitor, would plod around a fenced-in track with a handler walking alongside.

Beneath the platform used to board the elephant was a shack storing saddles and tools. Next to the stairs was a nook where staff could feed elephants hay to keep them still.

That nook is where the handler became trapped when the incident involving Maggie occurred.

The report says the elephant lunged at the handler when his back was turned. The animal pivoted nearly 90 degrees, blocked him in and beat him with her trunk.

“Maggie reportedly also used her head, butting him in the chest and pushing his head into her mouth,” it reads.

Photos taken by the inspector show at least two pieces of a wooden railing snapped in half during the attack. A spray of dried blood can be seen in another picture.

According to the investigation, a visitor reportedly still had one foot on Maggie’s back when she became aggressive.

Roughly 30 people were waiting in line and ran for safety, it says.

Two other animal handlers heard “wood snapping [and] a mixture of people screaming” before seeing Maggie’s handler bleeding, the inspector stated. The park’s superintendent of elephants was able to get her under control, it adds.

A spokesperson for air ambulance service Ornge told CBC in 2019 that a helicopter transported a man in his 30s to Hamilton General Hospital with serious injuries.

In a Facebook post shared after the attack, African Lion Safari described the employee’s injuries as non-life-threatening and said Maggie was still part of its herd.

Contacted recently by CBC, African Lion Safari said it could not share any updated information about the handler’s condition, citing privacy reasons.

The zoo also did not respond to questions about Maggie and whether she’s still living there.

Along with examining the elephant’s health, the layout of the track and the weather, the ministry looked into two other factors that could have led to the 2019 incident:

But the veterinarian who cared for the elephants at African Lion Safari said George, the other elephant used for rides, had never shown signs of coming into “musth,” states the report.

The inspector also discussed whether there was a connection between the attack and the way the elephant was trained, as well as the animal-handler relationship.

Much of that section of the report deals with controversial tools called guides or bullhooks — metal poles with a tapered hook at the end.

The zoo confirmed its handlers sometimes use guides to cue an elephant on the direction it should move, but they’re used “without exerting force,” general manager Trish Gerth said.

The park said a guide wasn’t used prior to or during the incident involving Maggie.

The park’s veterinarian told the ministry he had not seen “any signs … of aggression” from handlers to elephants.The inspector added he was told training with Maggie was done with as “little negativity as possible.”

Two years ago, the AZA adopted a policy barring bullhooks from routine training. “It has a brutal history,” said Ashe.

They’re instead used for emergencies only.

Based on the investigation, no prosecution was recommend following the 2019 attack because of a “lack of obvious contraventions … directly leading to the incident.”

The inspector said ways to better protect handlers during rides were assessed, but “limited viable solutions [were] identified.”

African Lion Safari prides itself on its conservation and breeding program. Gerth said the zoo’s mission is to provide the “highest standard of care” for its Asian elephants.

“Our hope is to inspire our visitors to protect and preserve biodiversity and endangered species,” she wrote.

Facette said the zoo provided CAZA with a review of the attack, including changes to prevent similar incidents.

CAZA also completed its own investigation, but Facette said he couldn’t share either document, pointing to legal and privacy issues.

The Canadian organization is part of the World Association of Zoos and Aquariums (WAZA), which updated its guidelines for animal-visitor interactions last year, calling for members not to participate in “experiences where animals perform in a manner that does not constitute normal and natural wild-state behaviour.”

“Do not present animals in a way that the visitors could perceive them as exotic pets or ‘performers,'” the recommendations read.

Facette said CAZA is reviewing WAZA’s changes and its own standards. Its accreditation commission is expected to report back in November.

“I do think in the very near future the board will likely approve a policy that will say elephant rides in Canada do not meet our standard,” he said.

Asked whether the current standards failed the handler hurt at African Lion Safari, Facette said he believes they did not.

“I don’t think it’s fair to say … that the standards of the time failed anyone.”