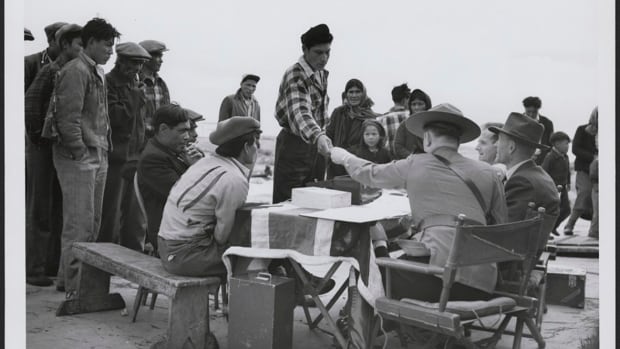 Since its signing, the 100-year-old Treaty No. 11 has come to the Northwest for the first time


The original document of Treaty No. 11 appeared in the north for the first time since it was signed 100 years ago.

According to one of the archivists involved, this was a logistical planning journey that took “months, months, and months”. An indigenous elder said that this is an opportunity to continue a dialogue on the “spirit and intention” of the local leaders to sign documents.

In the summer of 1921, more than a dozen Gwich’in, Sahtu Dene, Dehcho Dene, and T???ch? communities in the Royal and Northwest Territories signed Treaty No. 11.

In the decades that followed, most people bound by Treaty No. 11 did not know the content of the text. In 1969, when the government’s version of the treaty was first translated and read to the Danny Council of Chiefs, it immediately aroused anger.

“This is shocking,” Norman Yakeleya told CBC News earlier this year. “they [had] Agreed to… a treaty of peace and friendship”-but what they heard was another matter entirely.

John B. Zoe, who helped establish the T???ch? government in the Northwest Territories, was the former chief land claim negotiator. He said the meaning of the text was “always controversial.”

But he said that what made this document come to life was the signature of the indigenous leaders, which represented their commitment to establish a “relationship with the government in terms of the land, our language, our culture, and our ways”. life’s. ”

He said that this meaning is not part of the written text, but “spirit and intention”, which is what “people have kept alive all these years.”

This is what Zoe hopes to continue discussing.

“The days of the elders or the first generation who have witnessed these agreements are numbered,” he said. “We need to capture these thought processes and ensure that the original intention of the aboriginal party’s treaty being adopted will continue to pass, because there are two versions.”

For Zoe, the leader’s “full effort” to sign the 11th treaty is worth celebrating.

“This is… a tool [was] It has let us down in the past, but it is also a tool that allows us to recognize the power we have always had,” he said.

‘Similar to the form of a brochure’

Known as Canada’s last numbered treaty, Treaty No. 11 is “a bit like a pamphlet” and has a “marbled tail,” said Erin Suliak, NWT’s territorial archivist. Describes the “months, months, months” plan to obtain the document to Yellowknife.

Before the treaty commissioner Henry A. Conroy brought them to the community for the first time, these pages were written in cursive script.

The document comes from Ottawa and is kept by the Canadian government in the Canadian Library and Archives. Suliak said that for the sake of safety, in order to bring it to the Northwest, details as large as the plane it will take are kept secret, and details such as the light level of the exhibition are carefully planned.

“We must be careful about the display time of the various pages,” she said.

She said: “This is a 100-year-old document, and some protection needs to be done on it to stabilize it and ensure that it is in the best condition for travel and exhibition.”

For safety reasons, Suryak did not provide too many details about how the document will reach the north, but she did say that it will be accompanied by a plane taking off directly from Ottawa.

“We could not find a suitable shipper to transport by land,” she said.

Treaty 11 will be on display at the Prince of Wales Northern Heritage Centre in Yellowknife throughout September and October, but the exact date has not yet been announced.

Suliak expects to provide a timetable to the public so that people interested in a particular page or signature can plan their visit accordingly.

She said that the page turning will be carried out under “very strict” conditions that the public cannot access. The document will be accompanied by a faxed version, but allows people to touch it.

“Obviously, this document is different, but it looks exactly the same as the original treaty document. You can flip through it and see what it actually looks like,” Sulyak said.

Briony Grabke, spokesperson for the Department of Education, Culture, and Employment in the Northwest Territories, said that the Treaty 11 steering committee required the document to be returned to the North. She said that the committee is organized by the Royal Indigenous Relations and Northern Affairs Department, and its members include the Gwich’in Tribal Committee, the T???ch? Government, the Sahtu Dene Committee, Dehcho Aboriginals and Dene Nation.