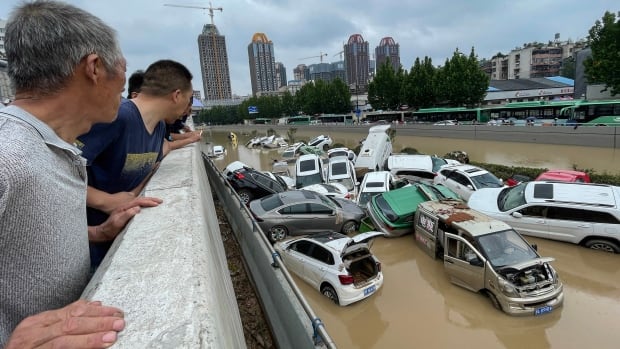 At least 25 people were killed in floods in China, the military blew up the dam


The Chinese military blew up a dam to release floods, threatening one of its most densely populated provinces, and the death toll from large-scale floods rose to at least 25 people.

The dam project was carried out in Luoyang city late on Tuesday night and coincided with the severe flooding in Zhengzhou, the capital of Henan Province, trapping residents in the subway system and trapping them in schools, apartments and offices.

Provincial officials said at a press conference that another seven people were missing.

Take a look at some of the losses in Zhengzhou after the severe flooding:

A video posted on Twitter by the news site The Paper showed subway passengers standing in chest-high brown muddy water, torrential torrents in the tunnels outside.

Traffic, work and life in the province have been disrupted. Heavy rains have turned streets into turbulent rivers, washed away cars and poured into people’s homes.

More than 100,000 people have been evacuated to safety. Henan Province has many cultural sites and important industrial and agricultural bases.

State media revealed on Wednesday that there was water at waist height and the rain was still falling.

To the north of Zhengzhou, the famous Shaolin Temple, known for its monks’ martial arts, was also hit hard.

Floods frequently occur in China during the summer, but urban development and the transformation of farmland have exacerbated the impact of such incidents.