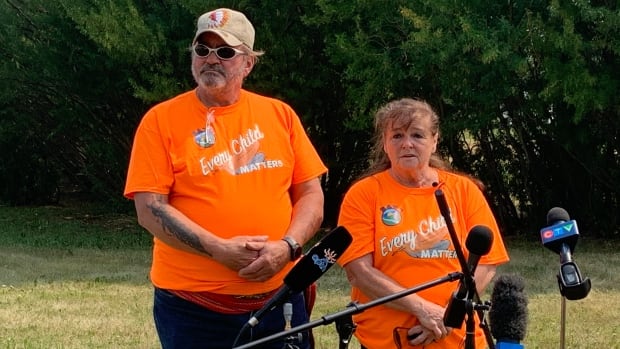 It started with a gift of tobacco.

When Karen Whitecalf, the women searching for unmarked graves at the former Delmas Indian Boarding School in Northwest Saskatchewan, arrived at Doug Montgomery and his wife Donna McBain She came with a gift at her home.

“It’s like an agreement to us,” Whitecraft said. “When we need something, we provide tobacco.”

Montgomery and McBain have a 13-acre field facing Highway 16 on the northeastern edge of the small village of Delmas in the Sask province. The site was once the site of the Delmas boarding school and its cemetery.

Founded by the Roman Catholic Church in 1901, the school was overcrowded, where students suffered from cold, peritonitis, scarlet fever, tuberculosis, jaundice, pneumonia and other diseases and often died. According to the National Truth and Reconciliation Center.

According to the National Center, the school closed in 1948-eight years later, an inspector warned that it was a fire hazard.

After similar efforts by Muskowekwan First Nation and Cowessess First Nation, it is now the third known location in Saskatchewan where ground penetrating radar searches for residential school graves.

The story about the body

As Whitecraft knows, the soft-spoken Montgomery and McBain are happy to help the Batford Institutional Tribal Chief (BATC) with the search. Or as McBain said on Saturday, “Do our best to find answers and try to figure things out.”

Montgomery and McBain were among the speakers, because BATC started the first round of ground exploration on site last weekend.

Both are wearing orange “Every child is important” T-shirts. Although their speeches were brief, Whitecraft said that without their cooperation, search work would be impossible.

Montgomery of Metis said: “I am grateful that we can help find anything that may or may not exist in any way.”

Montgomery said the couple bought the land from the bank two years ago because it has been repossessed.

They initially did not know the history of the site. Their purpose is “just to have a quiet and good place,” he said. “This is a beautiful house,” he said of the existing houses on the land.

He said that six months after purchasing the property, Montgomery began to hear stories about bodies in the area.

“It’s kind of scary,” he said. “Living in a cemetery is not anyone’s cup of tea. It is upsetting.”

Montgomery said that according to a story, the man who built the house in 1980 found the body while digging in the basement.

“This is not real news,” Montgomery said. “The elder knows about it. They mentioned it, and I talked to them.”

No matter what BATC found, Montgomery said he was ready to take on the role of guard.

“Then we will become what I call the guardians of the land,” he said.