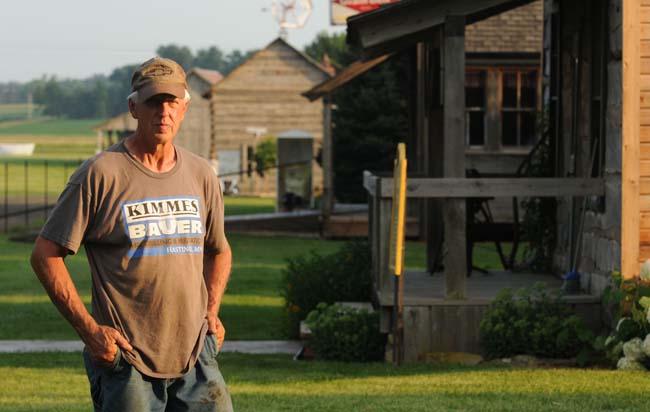 
Of course, collecting historic buildings in Minnesota is an addiction to 71-year-old Steve Ball. However, he said that what he admired most is the stories carried by these antiques and the memories they evoke in the hearts of tourists.

“A lot of people have memories, but they won’t talk about that memory until they see what activates it,” Bauer said.

Bauer met someone who worked as an auto mechanic in the 1950s and 1960s at Porky’s Diner in Sao Paulo in 2011. He also met people who met and married there. He likes to listen to stories.

Every year, Bauer opens his 160-acre log cabin Pioneer Village to the public during the Antique Electricity Show for a weekend. This year it will be held from July 23rd to 25th.

Visitors can visit more than 55 historic buildings collected by Bauer—from the former Hampton Prison to the old train station at the Federal Dam in Minnesota—covering more than a century of history. There will also be a repeat of the Old West and the military.

According to Bauer, there are always surprises at the show. This year, he said there will be a special patriotic surprise, but he will not reveal the secret in advance. In addition to buildings, there is also a vintage electricity exhibition of vintage cars, tractors and motorcycles. Truck and tractor towing, live music and daily parades will be part of the celebration.

Due to COVID-19, the show was cancelled on the occasion of its 30th anniversary last year. Also cancelled or postponed are more than 40 weddings scheduled to be held in buildings where special events are held in Pioneer Village on other dates.

“Last year we had a lot of sad brides,” Bauer said.

Bauer said he was lucky that his business could stand the test of this year. He uses his time to work on the land; he said that there is always work to be done.

Bauer began collecting Minnesota history when he was 16 years old. He had heard that a small wooden house built in the 1850s was about to be demolished. After studying the history of this building, he discovered that it was hand-built with local white oak trees and that the contract for the property was signed by Abraham Lincoln.

“I have always liked old things like antiques,” Bauer said. “I said’I want to save that house.'”

He moved it to farmland at the corner of East 220th Street and Michael Avenue, 9 miles south of Hastings.

After the visitors saw the cabin, Bauer got more antique buildings that people no longer wanted.

Now Bauer, his wife and three daughters run the property in Pioneer Village. His wife is responsible for maintaining the landscaping and large gardens of the property.