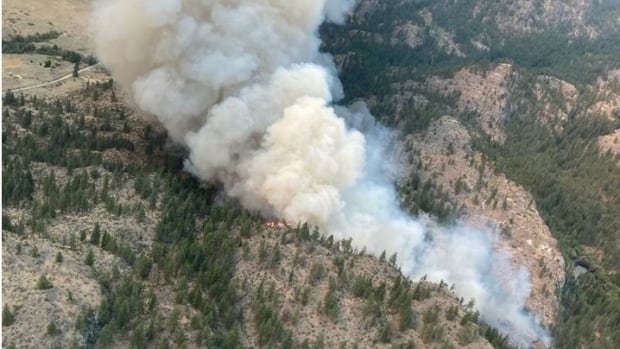 
The Osoyoos Indian Band of Okanagan Valley in British Columbia has issued evacuation orders to nearly 200 properties. Due to wildfires, further evacuation warnings and orders from nearby Osoyoos and Oliver are awaiting.

This wildfire, known as the Inkaneep Creek Wildfire, occurred on the land of the Osoyoos Indian Band, between Oliver and Osoyoos. In a few hours on Monday afternoon, it quickly increased from 3 hectares to more than 300 hectares. As of 9pm, the area is 700 hectares.

On Monday night, nearly 3,000 customers in the area lost power for several hours due to wildfires. FortisBC stated that this was a deliberate interruption to support the local emergency services of Oliver and Osoyoos.

The Oliver-Osoyoos region is located at the southern end of the fertile Okanagan Valley in British Columbia. This is a popular tourist destination, famous for its wineries.

BC RCMP spokesperson Dawn Roberts said that members of the Osoyoos and Oliver RCMP units have been deployed for tactical evacuation.

“Physical evacuation is underway. Members are actually going from house to house [they’re] Work closely with the Osoyoos Indian Band to ensure that we fight the most vulnerable areas,” Roberts said.

This fire is one of hundreds of wildfires currently burning in British Columbia, including more than 100 wildfires concentrated in the interior.

The evacuated residents have been scrambling to find a safe place-an increasingly difficult task.

Ken Gillis, chairman of the Thompson-Nicola region, said that Kamloops, Merritt or Salmon Arm did not have accommodation.

“They are absolutely full,” he said.

Ashes from the Inkameep fire (45 kilometers to the south) on my parasol. The red light shining on the tree is the sun. It seems to be a vigorous fire. pic.twitter.com/V6JhegCeSa