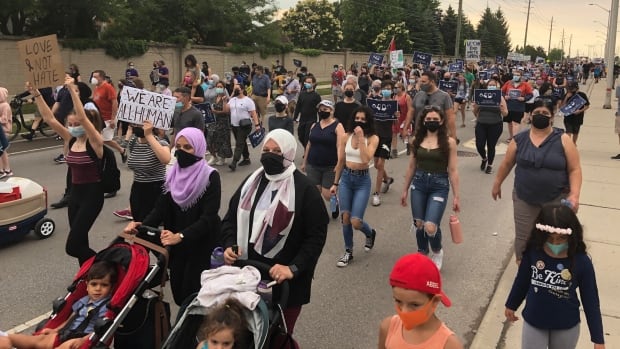 
After several deadly attacks on Canadian Muslims in recent years, the National Council of Muslims in Canada (NCCM) issued 60 policy recommendations to combat hatred and racism across the country.

“We cannot stand by and see more people die,” the committee said in a statement released on Monday.

“Islamophobia is fatal, and we need to take action now.”

Press conferences will be held in Toronto, London, Ontario, Quebec City and Edmonton on Monday to announce the recommendations.

Anti-Muslim hate attacks in these cities in recent years include the hit-and-run incident on June 6. The Afzaal family in London, Ontario., Fatal stabbing of volunteer caregiver Mohamed-Aslim Zafis Outside the Toronto Mosque in September last year, The attack on a mosque in Quebec City in January 2017 Six people were killed and dozens were seriously injured And at least six hate-motivated attacks against black and racialized Muslim women Edmonton in recent months.

Mohamed Labidi, co-founder and former chairman of the Quebec City Mosque, said at a press conference that Islamophobia is escalating and becoming more frequent.

Rabidi said at a press conference this morning: “We are best able to provide the government with solutions to combat Islamophobia and hatred.” He said that in the face of hatred in Canada, Muslims are “deeply caught in it.” “.

Mustafa Farooq, chief executive of the National Council of Muslims in Canada, said at another press conference in London, Ontario that the government can play a role in this issue.

“At the federal government level, we need to see a commitment to fight Islamophobia within the government.”

Before the National Islamophobia Summit, Mustafafaruk, CEO of the National Council of Muslims in Canada, outlined what he hopes governments at all levels will take to help combat Islamophobia. 2:52

The policy recommendations issued on Monday are categorized by federal, provincial, and municipal governments. Some of these include:

These suggestions can be read in full at the bottom of this story.

Congressman Vote unanimously for After the attack in London, Ontario, a bill called for a National Islamophobia Summit to be held in June. It will be held on Thursday as part of Canada’s anti-racism strategy.

On the same day the motion was passed, the federal government also announced that it would hold additional anti-Semitism summits. It will be held on Wednesday.

NCCM said: “Canadians with many different backgrounds have been loyal allies of the Muslim community and diverse communities in Canada.”

“After the Islamophobic incident, it was obvious through messages of mourning and hope, human shields around mosques, comfortable lawn signs when praying, and solidarity to demand change. So, although there is no doubt that we are in Canada There is the issue of Islamophobia. There is no doubt that as Canadians, we also have the collective will to take action on this.”