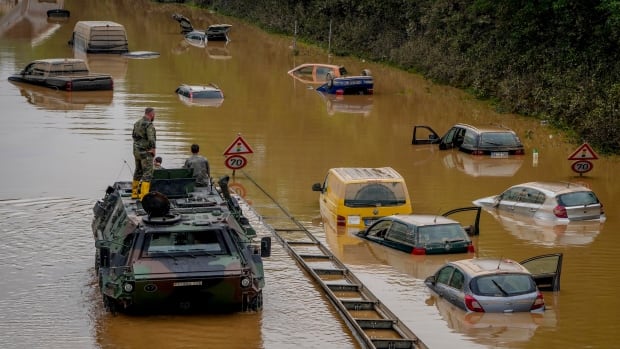 More than 160 people died after devastating floods in Western Europe


As the death toll caused by the catastrophic floods in Western Europe rose to more than 160, rescuers struggled to cope with the damage caused by the falling water on Saturday, and attention turned to the long work of rebuilding the affected communities.

After the floods on Wednesday and Thursday, the German authorities immediately classified a large number of people as missing persons-apparently due in large part to the chaos in the affected area, multiple reports and communication difficulties.

By Saturday, the authorities were still worried that more people would be found dead, but said the number of missing persons was declining, but did not provide specific figures.

In Belgium, 103 people were missing on Saturday, but the crisis center said that lost or uncharged mobile phones and people who were taken to the hospital without identification and had no chance to contact relatives were considered statistical factors.

At the same time, the receding floods eased traffic in many affected areas and revealed the extent of the damage.

German President Frank-Waltersteinmeier said after visiting the town of Elfstadt in the southwest of Cologne: “Many people have lost everything they have built in their lives.”

Steinmeier said people in the affected areas are counting on continued support.

“Many people in these areas have nothing but hope, and we must not let down that hope,” he said.

A distressing rescue operation was launched in Erftstadt on Friday. When the ground in one block collapsed, at least three houses and part of a mansion in the Blessem district of the town collapsed.

The German military used armored vehicles to clean cars and trucks on nearby roads, some of which were at least partially submerged. Officials worried that some people would not be able to escape in Erftstadt, but no casualties were confirmed by Saturday afternoon.

In the Ahrweiler area, the police warned that the downed electric wires could pose potential risks and urged curious tourists to stay away. They complained on Twitter that potential tourists blocked some roads.

After a dam on the Ruhr broke, about 700 people were evacuated from parts of the German town of Wasenberg.

In eastern Belgium, train lines and roads in many areas are still blocked.

A resident in the Belgian town of Herk-de-Stad said that she delayed sleeping to empty the water in the house.

“We were pumping water all night, trying to get the water out of the house,” Elke Lenaerts told VTM Broadcasting Corporation on Saturday.

Parts of the southern part of the Netherlands also suffered severe flooding, but thousands of residents were still allowed to return to their homes after being evacuated on Thursday and Friday.

Caretaker Prime Minister Mark Rutte said: “First, there is a corona, now it is a flood, and soon people will have to clean up and restore.”

An emergency embankment in the town of Horn in the Netherlands did not pass and some houses were flooded. Due to the debris, the authorities issued a warning not to approach the Maas River. Rescuers tried to rescue a cow trapped in the depths of muddy waters.

Roads, basements and railroad tracks were flooded, and train services between the town of Deqin in the Czech Republic and Bad Schandau in Germany were interrupted. The children’s summer camp on the Czech side had to be evacuated.