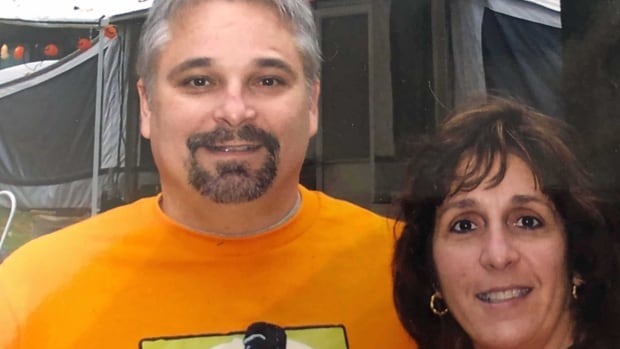 
When the waves of grief hit, Michele Preissler tried to stabilize herself by making herself cry.

In the two months after her 63-year-old husband, Darryl, died of COVID-19, a woman in Pasadena, Maryland said that she couldn’t sleep well, didn’t cook, and her life was full of anxiety and guilt.

“Have you ever had a nightmare and wanted to go somewhere but couldn’t get away?” she said. “That’s it. Every day is like,’How do I even breathe? Where is he? When does he come in?'”

Pressler said that she thinks her husband’s death is preventable, and if he was vaccinated against the coronavirus when the age group in his hometown of Maryland could be vaccinated, then he is still alive today.

As a hospital employee in Annapolis, she was vaccinated shortly after vaccinations started in December 2020 in the United States.

Watch | Michelle Preissler says that vaccination is about saving lives:

Michele Preissler of Pasadena, Maryland, whose husband died of COVID-19 in May, begged those who might not be willing to get the coronavirus vaccine to learn from her experience Instead of waiting for vaccinations. 0:30

She said that she repeatedly asked her husband if he would also accept his injection. Although he did not deny the idea, he kept postponing it, saying that he was busy with work. He is a respected self-employed carpenter, known for his superb craftsmanship and attention to detail.

His wife said that he was also worried about potential side effects because some of the drugs he was taking at the time would damage his immune system.

“My husband did not get the vaccine, and now I regret not having an appointment,” she said.

Attend a wedding in April

In April, the couple attended a family wedding for more than 100 people. Presler suspected that her husband contracted the disease there.

She believes this happened at the reception. Darryl asked his elderly aunt to dance to a slow song. None of them wear masks.

“We didn’t find out that she was positive until later,” Presler said. “I knew in my heart that he thought that. I mean it was intimate contact, did you know? Face to face, hug, and speak in front of the other person.”

A week after the wedding, Daryl began to show symptoms of COVID-19. He was eventually hospitalized and used a ventilator, and had a stroke. On May 22, less than a month after he started showing symptoms, he died.

His aunt also died of COVID-19.

“I do know that if my husband gets this vaccine, he will still be here,” she said in tears in an interview at her home in Pasadena.

“And he is not here, he will not come back. So if anyone can learn from it, what am I going through, please learn.”

The trajectory of the U.S. pandemic is changing rapidly after the number of cases, hospitalizations, and daily deaths have declined for weeks.

Dr. Rochelle Walensky, director of the Centers for Disease Control and Prevention (CDC), said: “There is a clear message: this is becoming an unvaccinated epidemic.”

At the briefing of the White House Coronavirus Task Force on Friday, she painted a bleak picture of the pandemic.

Although the numbers are well below the peak in January, all COVID-19 indicators are moving in the wrong direction.

Speaking of new daily cases, the CDC stated that the 7-day average has risen by nearly 70%.

The number of hospitalizations increased by 36% every week, and during this period, the average daily death toll increased by 26% to 211 per day.

“We have seen outbreaks in parts of the country where vaccination coverage is low, because people who have not been vaccinated are at risk,” Varensky said. “Communities that are fully vaccinated are generally well.”

According to data from the Centers for Disease Control and Prevention, overall, nearly 56% of the U.S. population has at least one dose of the coronavirus vaccine. More than 48% of people have been fully vaccinated.

However, vaccination rates vary from state to state.

Jeff Zients, Coordinator of the White House COVID-19 Task Force, stated that the spread of the more contagious delta variant could lead to “an increase in COVID cases in the coming weeks, which are concentrated on lower vaccination rates. Community”.

“In the past week, only four states accounted for more than 40% of all cases, and one-fifth of them occurred in Florida,” he said.

“In the community, these cases mainly occur in people who have not been vaccinated.”

According to the CDC website, the four states with the most new cases per capita are Arkansas, Missouri, Florida and Louisiana.

Arkansas has the highest seven-day case rate, with nearly 229 cases per 100,000 people. The vaccination rates in these states are at the low end of the scale.

Approximately 40% of the residents of Louisiana have received an injection. It is 44% in Arkansas and 46% in Missouri. The absorption rate in Florida is higher, with 55% of residents receiving at least one dose.

Some of these national trends are playing a role in the ICU at Nashville Vanderbilt University Hospital, where Dr. Wes Erie works.

In an interview in his office, he said: “Every patient who walks into our ICU is basically an unvaccinated person. They will eventually regret their decision.”

He said that not only were many of his patients not vaccinated, but the young population eventually needed urgent care.

He said: “In terms of the average age at which our hospital is infected with the new coronavirus, we have dropped by two to three years.”

Ely said he will not judge patients who have not been vaccinated, but he hopes that more people will follow the science and get vaccinated.

“It makes me sad, thinking it might be so easy to stop because vaccines are very effective in preventing moderate to severe diseases,” he said.

Ely is a leading ICU patient experience researcher in the United States, focusing on humanized medicine.

His latest book, Every deep breathIt will be released in September, focusing on the benefits of keeping family with patients during a pandemic.

He said: “I think many people end up dying of loneliness, isolation and organ failure caused by the virus.”

Watch | Preissler says that based on her experience, the risk of COVID-19 is greater than the risk of vaccine:

Michele Preissler said she believes that if her 63-year-old husband, Darryl, had been vaccinated against the coronavirus, he would still be alive. Daryl died of COVID-19 in May a few weeks after attending the family wedding. 0:30

Preissler was able to accompany her husband in his last few days.

When she looked back on his life, in the photos of family vacations and holidays, she started crying because she realized that her husband would not be with her at more special events this year or their 30th wedding anniversary.

“There will be no more photos… that’s it, it’s done,” she said, holding a photo collage in her hand.

Watch | US health officials warn of an increase in unvaccinated COVD-19 cases:

After several weeks of decline, the number of COVID-19 deaths in the United States has risen again, and most people in the hospital have not been vaccinated. 2:05