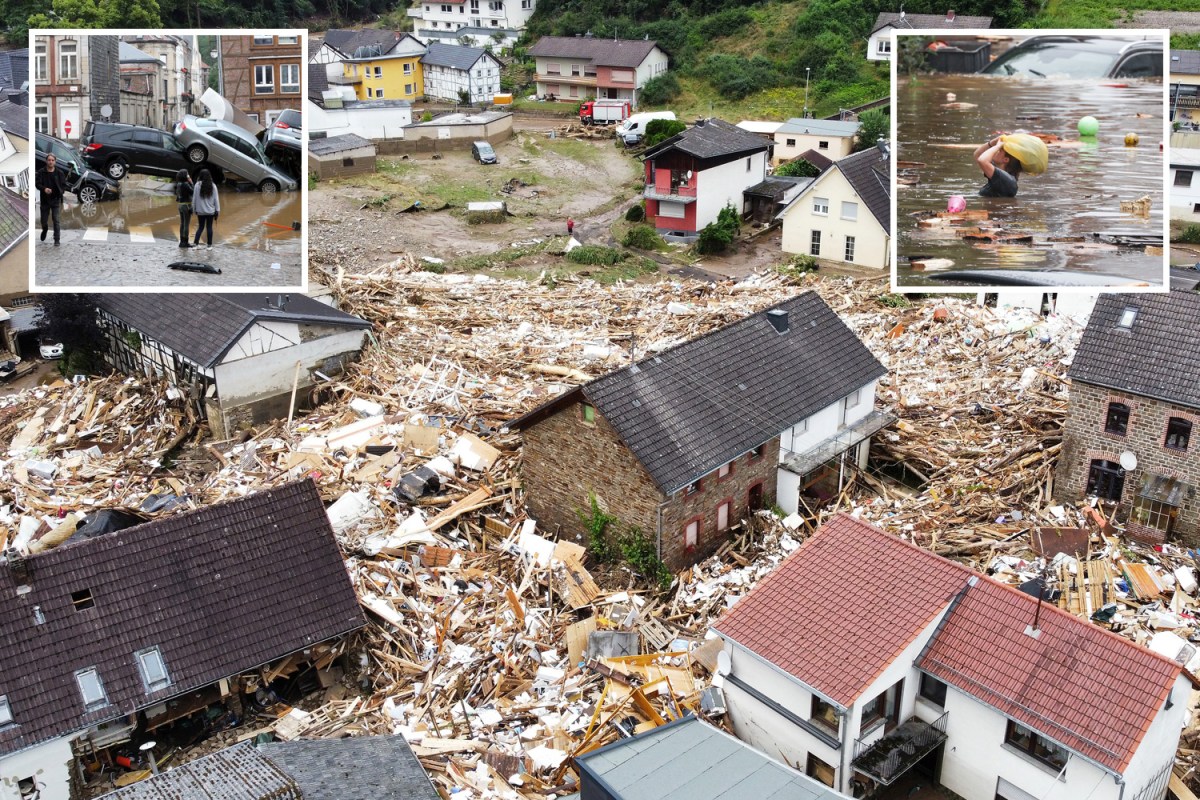 Germany floods – At least 90 dead and ‘1,300 missing’ after worst storm in memory and MORE rain is coming


MORE than 90 people have died and up to 1,300 are feared missing after apocalyptic rains ravaged Germany, the Netherlands and Belgium, sparking deadly floods.

Residents have been ordered to evacuate as swollen rivers are forecast to rise even higher tonight as more extreme weather is on the way — with further torrential rain forecast to hit the deluged region.

The death toll from devastating floods across parts of western Germany and Belgium rose above 90 today, as the search continued for hundreds of people still unaccounted for.

About 1,300 people were missing in the Ahrweiler district south of Cologne, the district government said on Facebook.

Mobile phone networks have collapsed in some of the flood-stricken regions, which means that family and friends were unable to track down their loved ones.

Authorities in the German state of Rhineland-Palatinate said 50 people had died there, including at least nine residents of an assisted living facility for people with disabilities.

In neighbouring North Rhine-Westphalia state officials put the death toll at 30, but warned that the figure could rise further.

Belgian broadcaster RTBF reported at least 12 dead in the country.

The devastating storm dumped 148 litres of rain per square metre within 48 hours, which usually sees 80 litres during the whole of July.

Regional interior minister Roger Lewentz told broadcaster SWR: “When you haven’t heard for people for such a long time … you have to fear the worst.”

“The number of victims will likely keep rising in the coming days.”

German Chancellor Angela Merkel dubbed the dire weather “a catastrophe” ahead of a meeting in Washington with US President Joe Biden.

She told a press conference: “Heavy rainfall and floods are very inadequate words to describe this — it is therefore really a catastrophe.”

Flooding has also reached Belgium, Luxembourg and the Netherlands, while several regions in Switzerland, France and the Czech Republic also on high alert.

The unprecedented weather has created a perilous situation in Western Europe, seeing thousands forced to evacuate as homes collapse and cars are swept away by floodwaters.

At least 58 people have died in Germany while another nine fatalities were reported in Belgium – including a 15-year-old girl.

Police have asked people to share footage and pictures of the floods to help them locate the missing as hundreds of soldiers were deployed to aid authorities.

France, Italy, and Australia have sent a flood rescue team to assist overwhelmed Belgian authorities, as the government of the country’s Wallonia region granted €2.5 billion in emergency aid.

Residents who live near the banks of the Meuse and Sambre rivers in Namur, Belgium and those in the city of Liege have been urged to evacuate as waters continue to rise.

In the Ahrweiler district of Germany’s Rhineland-Palatinate, at least 28 people have died — 19 of which were killed after the Ahr river burst its banks, destroying six houses.

At least another 30 died in the North Rhine-Westphalia state, with 15 deaths being reported in the district of Euskirchen.

German police have said up to 70 people are missing in the Schuld municipality after homes sat along a river collapsed.

In Cologne, a 72-year-old woman and a 54-year-old man died when their basements flooded while another drowned in his cellar in Solingen.

Two German firefighters also died during rescue operations in the North Rhine Westphalia towns of Altena and Werdohl, with one drowning and another dying of a heart attack, the Telegraph reports.

In Leverkusen, 468 people were evacuated from a hospital after floods cut off power, according to the Frankfurter Allgemeine Zeitung.

Expressing her dismay on Twitter, German Chancellor Angela Merkel said: “I am shocked by the disaster that has affected so many people.

“My condolences go out to the relatives of the dead and missing. I thank the many tireless helpers and emergency services from the bottom of my heart.”

North Rhine Westphalia leader Armin Laschet, who is running to succeed Merkel in September elections, cancelled a party meeting in Bavaria to survey the damage in his state, which is one of Germany’s most populous.

“We will stand by the towns and people who’ve been affected,” Laschet, clad in rubber boots, told reporters in the town of Hagen.

Large chunks of Rhineland-Palatinate and North Rhine Westphalia are under water while villages in Belgium‘s Liege and Wallonia provinces were being evacuated due to rising river levels.

Belgium news outlet VRT NWS quoted the mayor of Pepinster, a small town of around 10,000 people in the Liege province, who said dozens of houses collapsed along the Vesdre River that flows through the area.

In the town of Chaudfontaine, daily Le Soir reported that nearly 1,800 people had to evacuate while 250 people in Moelingen were forced to leave their homes overnight.

“The emergency services advised us not to wait until tomorrow morning and to get out immediately” one woman told Belgian TV station VTM News. “The house is completely full of water.”

VRT NWS also confirmed that the body of a 50-year-old man was found in the basement of his house in Aywaille, while the BBC confirmed five others have died.

Alexandre de Croo, the Belgian prime minister, tweeted: “Belgium faces unprecedented rainfall. We assure all those affected as well as the local authorities our full support.

“All emergency services are mobilized with the help of the Ministry of Interior and Defense. Belgium receives international support.”

Meanwhile, 433 homes are without electricity and a number of care homes have been evacuated in the southern Dutch province of Limburg, which borders Germany and Belgium, due heavy rainfall, according to DutchNews.nl.

Local news footage showed small rivers of water flowing through the scenic city centre’s streets and at least one care home had been evacuated.

It’s a catastrophe! There are dead, missing and many people still in danger.

Meanwhile the Luxembourg government set up a crisis cell to respond to emergencies triggered by heavy rains overnight as Prime Minister Xavier Bettel reported “several homes” had been flooded and were “no longer inhabitable”.

Back in Germany, homes in the Ahrweiler district are reportedly in danger of suddenly collapsing, while six have already crumbled, local police said Thursday morning.

Residents have been seen using shovels and excavators to clear mounds of stones and earth from main roads.

In neighbouring North Rhine Westphalia, at least 13 people are confirmed dead with bodies found scattered in several places across the Eifel valleys.

Four of the dead were in the municipality of Schuld south of Bonn where six houses were swept away by floods, a police spokesman in the city of Koblenz said.

Flooding has caused major damage to properties and forced authorities to close off large portions of motorways leading in and around the inundated areas.

A police spokesman in Koblenz, Rhineland-Palatinate, said that up to 70 people are missing, Bild reports.

Some 50 people trapped on their roofs have been rescued, a local police official said.

The situation in the rural area of Eifelkreis Bitburg-Prum has been described as “extremely dangerous” after 15 deaths were reported.

A family of five was reportedly stranded in their home while being surrounded by rising water – with rescue attempts proving unsuccessful.

Residents were seen climbing onto the roofs of their homes in a desperate attempt to be rescued by helicopters.

Rescuers have also become trapped in some parts due to the strong current of floodwaters.

“There are many places where fire brigades and rescue workers have been deployed. We don’t yet have a very precise picture because rescue measures are continuing,” a police spokesperson said.

“It’s a catastrophe! There are dead, missing and many people still in danger,” he said.

“All of our emergency services are in action round the clock and risking their own lives.

“I extend my sympathies to the victims of this flood catastrophe.”

The Germany Weather Service issued an extreme weather warning for three states this week and said rains over the past 24 hours had been “unprecedented”.

Heavy rain is forecast across the region on Friday, raising concerns more fatalities could be recorded.

The city of Hagen declared a state of emergency after the banks of the Volme river burst, leaving around 190,000 households without power.

Rail and road transport has been disrupted by the torrential downpours and hundreds of soliders have been called in to help with evacuations.

More storms are expected to hit southwestern Germany today and could last until tonight, forecasters said.

The country was hit by heavy rains caused by a low-pressure weather system that meteorologists have dubbed “Bern”.

Environment official Bernd Mehlig told WDR: “We see this kind of situation only in winter ordinarily.

“Something like this, with this intensity, is completely unusual in summer.”

According to 2019 figures on statista.com, North Rhine Westphalia is the most populated region in Germany with 18million of the country’s 83million inhabitants and consists of cities such as Dortmund, Dusseldorf and Cologne.

Residents evacuated near banks of Meuse and Sambre rivers in Belgium