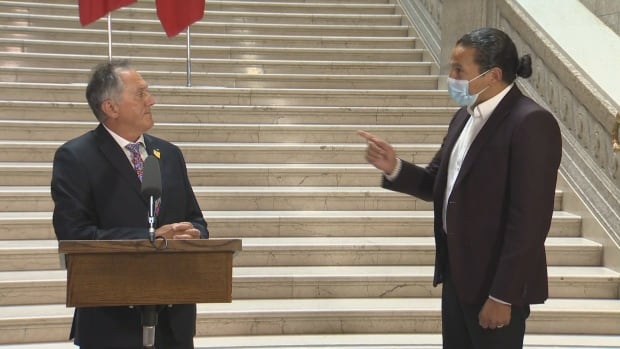 
Minutes after he was sworn in, the new Minister of Manitoba Aboriginal Reconciliation and Northern Relations was directly challenged in the legislative building because he said those who run boarding schools “believe that they are doing the right thing.”

Alan Lagimodiere told reporters that his understanding of the boarding school system is that it aims to provide indigenous children with the skills they need to integrate into society.

Lagimodiere was subsequently interrupted by Wab Kinew, the leader of the New Democratic Party of Manitoba, who said he could not accept Lagimodiere’s remarks, who appeared to be defending the boarding school.

Kinew said: “The boarding school made it clear that it would kill the Indians on the children.”

“This is not cultural relativism, nor is it historical revisionism. We can say that it is wrong.”

Raj Modier of Metis responded to the question of Agassiz MLA’s resignation as Minister of Aboriginal and Northern Relations based on Governor Brian Pallister’s comments. The comments indicate that the colonization of Canada was done in good faith.

Kinew went on to say that if Lagimodiere wanted to cooperate with the Aboriginal community, he could not defend the boarding school.

“We all know that it was wrong,” Kinew said.

Raj Modil was then asked by reporters what he thought was the intention of the boarding school. He responded by saying “assimilate indigenous people into non-indigenous culture.”

The minister later apologized for his comments on Twitter, saying that he was wrong:

Please see my statement below. pic.twitter.com/tNzE5bSM6U