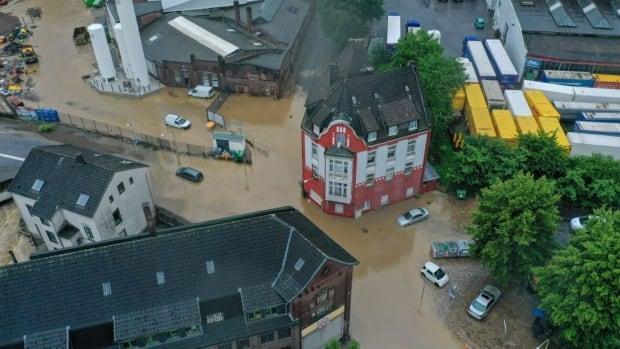 German houses collapsed in severe floods, at least 7 people died and many are missing


After severe flooding turned streams and streets into turbulent torrents, washed away cars and caused some buildings to collapse, at least 7 people were killed and several people were missing in Germany.

Police in the western city of Koblenz said Thursday that 4 people were killed in Ahrweiler County and about 50 people were trapped on the roofs of houses waiting for rescue.

Six houses collapsed in the village of Schuld overnight. The police said: “According to reports, many of us are missing.”

Schulder is located in Eifel, a volcanic area composed of rolling hills and small valleys in southwest Cologne.

After many villages were rendered impassable by floods and landslides, the full extent of the damage in the area remains unclear. Videos posted on social media showed cars floating on the streets and houses partially collapsed in some places.

After days of heavy rains also affected most areas in western and central Germany and neighboring countries, causing extensive damage, the authorities declared a state of emergency in the area.

Police said an 82-year-old man died after falling over a flooded basement in the western city of Wuppertal, one of the worst-hit cities.

Most of Germany’s most populous state, North Rhine-Westphalia, has suspended rail connections. Governor Armin Laschet will succeed Angela Merkel as prime minister in the German general election this fall, and is expected to visit the flood-stricken city of Hagen later on Thursday.

The German Meteorological Agency DWD predicts that the rainfall will ease on Thursday.

Continuous rains throughout the night exacerbated the flooding in eastern Belgium. One person was reported to be drowning and at least one person was missing.

The water level in some towns has risen to unprecedented levels, and their centers have become raging rivers.

Major highways were flooded, and in the south and east of the country, rail services stated that all traffic had stopped, adding that “the possibility of alternative traffic is very small”.

A local governor told the RTBf network that in Eupen east of the German border, a man was reported to have died after being washed away by a torrent.

In Liège, the main city in eastern Belgium, the Meuse may break through its banks and flow into the city center early in the afternoon. The police warned citizens to take precautions.

According to Dutch media reports, authorities in the southern Dutch town of Valkenburg near the German-Belgian border evacuated a nursing home and a hospice hospital overnight. Flooding turned the main street of the tourist town into a river.

Late Wednesday, the Dutch government sent about 70 soldiers to the southern province of Limburg to help with tasks, including transporting evacuees and filling sandbags when the river bursts. There are no reports of flood-related injuries in the Netherlands.

This week, unusually heavy rains also flooded large areas in northeastern France, causing trees to collapse and dozens of roads were forced to close. Local broadcaster France Bleu reported that the train route to Luxembourg was interrupted and firefighters evacuated dozens of people from their homes near the Luxembourg-German border and the Marne region.

According to data from the French National Meteorological Agency, the rainfall in some areas was equivalent to two months in the past one or two days. With the ground already saturated, the service predicted more downpours on Thursday and issued flood warnings for 10 areas.