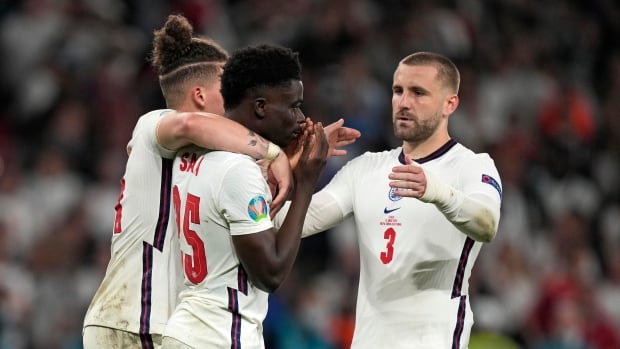 
After his team lost in the European Championship final, an English football player on Thursday condemned the social media company for doing too little to block “hate and hurt” messages on its platform.

In comments on Instagram, Twitter and Facebook, Bukayo Saka stated that he does not want anyone else to be the kind of news he and teammates Marcus Rashford and Jadon Sancho received after three black players missed a penalty in the end of the shootout. Sunday The game against Italy.

“I immediately knew what the hatred I was going to suffer, and [it] 19-year-old Saka wrote on Instagram, “Your powerful platform has not taken enough measures to block this information. This is a sad reality. There is no place for racism or hatred in football.”

According to a statement from the National Police Chiefs Commission, the British Football Police Department is investigating potential hate crimes related to online abuse, and four people have been arrested.

“We are working closely with social media platforms and they provide the data we need to investigate,” said Cheshire Police Chief Mark Roberts, who is in charge of national football policing. “If we determine that you are behind this crime, we will track you down, and you will face the serious consequences of shameful behavior.”

The hate crime investigation took place after a night of widespread crime and chaos during and after the European Football Championship on Sunday. The police chief said that as of Tuesday, authorities across the country had arrested 264 people in connection with the 897 incidents surrounding the final.