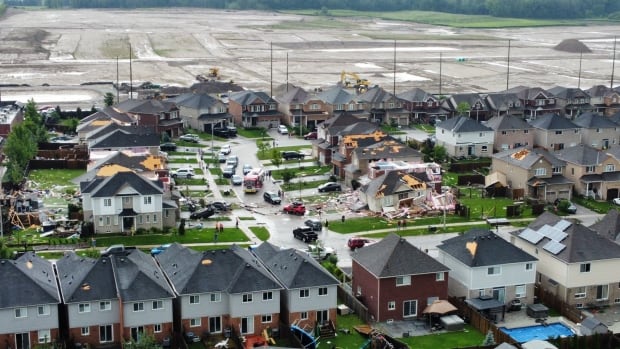 A suspected tornado has landed in Barrie, Ontario.Hail and strong winds damaged buildings in the area


On Thursday, a suspected tornado swept through Barrie, Ontario, and houses were severely damaged.

Residents of Bari posted photos and videos of the storm’s damage. The roofs, backyards and fences of many houses were damaged.

Barry Police, located about 115 kilometers north of Toronto, said they are responding to “multiple damage reports” in the southeast of the city.

Environment Canada issued the first severe thunderstorm warnings to Barry, Midland and Orillia before noon. In the early afternoon, the alert was upgraded to a tornado warning and ended before 3pm Eastern Time.

By 3 pm, Environment Canada issued another tornado warning to Newmarket, Georgina, Uxbridge and surrounding areas, but it ended at 3:30 pm. As of 3:30 pm, the tornado warning in the Peterborough-Kawartha Lakes area is in effect and has ended in other areas.

According to Environment Canada, most areas of southern Ontario outside of Toronto are still under surveillance for severe thunderstorms.

Hazards include destructive wind gusts of 90 to 110 km/h, nickel-sized hail and heavy downpours.

The agency said it will continue to monitor possible tornadoes.