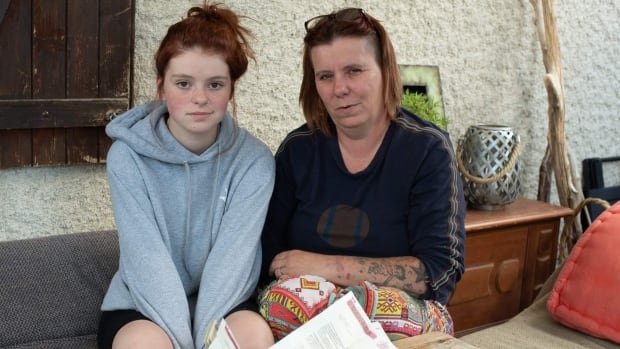 
Laurence Lacroix does not intend to return from France without a daughter.

The restaurant owner in Saguenay-Lac-Saint-Jean is one of dozens of temporary residents of Quebec. Their children are not allowed to re-enter Canada after traveling abroad with their parents.

The family said they were separated due to strict COVID-19 travel restrictions.

Children of temporary residents who are not born in Canada are considered “visitors,” even if they have been educated in the country, which means that the Department of Immigration, Refugees and Citizenship Canada (IRCC) needs to approve their return.

“How do you explain to a 14-year-old girl that her mother must leave on Saturday…I can’t give her a date when she will return,” Lacroix said.

Lacroix and her 14-year-old daughter Louhann left Montreal on June 21 for France to visit Lacroix’s father. He died of cancer. They have not seen him since immigrating to Canada four years ago.

After visiting him, they were on their way home, arrived in Germany, and took a connecting flight to Montreal.

Lacroix stated that Air Canada staff prevented Louhann from boarding the plane “because of her visa.” She asked the airline for an explanation, but received no explanation.

“They didn’t explain anything to us,” she said.

On the cusp of living

Lacroix has only two and a half months to obtain permanent residency status, but her work permit and Louhann’s visitor visa will both expire on July 20. She said she struggled between staying with her daughter and complying with visa restrictions.

Due to limited funds, the two ran aground in Europe, took an eight-hour bus to Paris, and then took a six-hour train, temporarily staying at a friend’s house.

“We only have things to carry with us. The luggage returned to Montreal,” Lacroix said. “For me it’s one thing, but for a 14-year-old girl, it’s a bit complicated.”

The visit to France originally lasted only one week, but was extended after Luhan was refused at the airport. Now that their COVID-19 negative test is out of date, if they try to return again, they must do it again.

Irene Akbrout, her partner and their 6-year-old daughter hope to use the recently relaxed quarantine restrictions to fully isolate vaccinated travelers.

As temporary residents awaiting permanent residency, they spent two weeks in Mexico before discovering that their daughter needed permission to re-enter Canada.

“We know that the border is closed to tourists, but we are talking about our daughter. She won’t be backpacking in Quebec. This is crazy!” Akbrout said.

An IRCC spokesperson said in a statement to Radio Canada that immediate family members, such as those of temporary residents, may be eligible to return to the country as long as they travel for necessary or non-discretionary purposes.

“To be exempt, [children] If they are from a country other than the United States, they must also obtain written permission from IRCC,” said Sonia Lesage.

This process can take up to 14 working days.

Without the care of French relatives, Lacroix’s daughter will have to stay with family and friends until her case is reviewed.

“I know she will be with friends, but this is different. This is not us. This is not her mother or her father,” said Lacroix, who plans to fly home alone on Saturday.