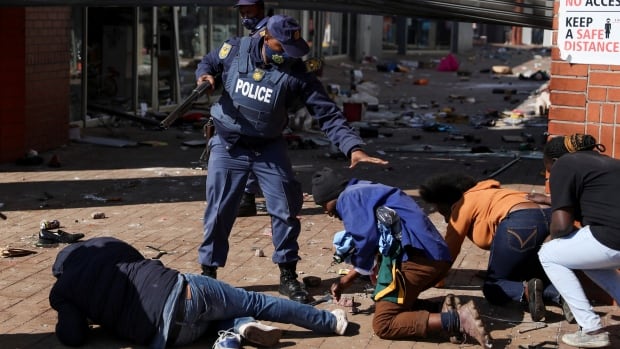 
The South African military said on Monday that South Africa will deploy soldiers to quell the violence that broke out after former President Jacob Zuma was imprisoned. The riots and robberies in the previous days caused at least six deaths.

After the weekend riots in his hometown of KwaZulu-Natal (KZN) and Gauteng province where Johannesburg is the country’s largest city, Zuma challenged him to 15 months’ imprisonment in the country’s Supreme Court. The riots have become more serious.

The police stated that 219 people had been arrested because opportunistic criminals appeared to use some people’s anger at Zuma’s imprisonment to steal and cause damage.

Any confrontation with soldiers may encourage Zuma and his supporters to claim that they are victims of politically motivated suppression by his successor, President Cyril Ramaphosa.

Zuma, 79, was sentenced at the end of last month for ignoring the order of the Constitutional Court and providing evidence in an investigation into high-level corruption during his nine-year tenure before 2018.

The decision to imprison him stemmed from legal proceedings and was seen as a test of South Africa’s ability to enforce the rule of law after apartheid, including confronting powerful politicians.

“The South African Defence Force has begun the pre-deployment procedures… assisting law enforcement agencies deployed in Gauteng and KwaZulu-Natal… quelling the riots that have occurred in the past few days,” the military Said in a statement.

“duration [of the deployment] The number of soldiers deployed will be determined based on an assessment of the local situation. “

At the virtual hearing, Zuma’s lawyers asked the Constitutional Court to revoke his imprisonment on Monday, on the grounds that the judgment can be reconsidered if the affected person is absent or contains a patent error.

Legal experts say that Zuma’s chances of success are slim.

Images taken by a local TV channel on Monday showed that a shopping mall in Pietermaritzburg in KZN was on fire and a nearby highway was closed to prevent further violence. According to TimesLIVE website, another shopping mall in Vosloorus, Gauteng, was set on fire due to vandalism and riots.

The government intelligence agency NatJOINTS stated that the bodies of four people were found in Gauteng, and at least two of them suffered gunshot wounds. Two deaths occurred in KZN, and all six people are under investigation.

Zuma’s imprisonment marked a significant decline in the position of a leader in the liberation movement’s transformation into the ruling African National Congress (ANC). Before 1994, he had been imprisoned by the white minority rulers of South Africa for his efforts to make all citizens equal before the law.

Ramaphosa said on Sunday that after the COVID-19 pandemic, violence is undermining efforts to rebuild the economy.

The corruption investigation that Zuma refused to cooperate is examining allegations that he allowed three Indian-born businessmen-Atul, Ajay, and Rajesh Gupta-to plunder national resources and peddle the impact on government policy. He and the Gupta brothers fled the country after he stepped down and are believed to live in Dubai. They denied wrongdoing.

Zuma also faces a corruption case related to the $2 billion arms trade when he was vice president in 1999. He denied the allegations in this case.