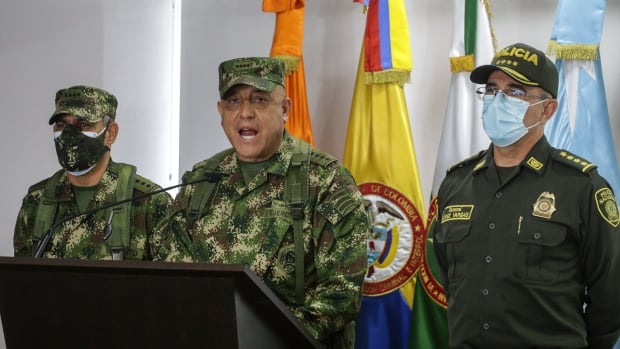 
The United States and Colombia said on Friday that they will send law enforcement and intelligence officials to assist Haiti in investigating the brutal assassination of President Jovenel Moïse.

In the early hours of Wednesday morning, a group of people assassinated Mois at their home in Port-au-Prince, which plunged Haiti into a deeper political crisis, which could exacerbate hunger, gang violence and the COVID-19 outbreak.

Haitian police stated that the assassination was carried out by a commando composed of 26 Colombians and two Haitian American mercenaries.

Haitian Americans are identified as 35-year-old James Solach and 55-year-old Joseph Vincent, both of whom are from Florida.

After a gun battle with the Haitian authorities in Petionville, a hillside suburb of the capital Port-au-Prince where Mois lived, 17 people were arrested, including Soragi and Vincent.

According to Haitian police, three others were killed and eight are still at large. They said that the authorities are looking for the mastermind of the operation.

A judge investigating the case said that Moise was found lying on his back on the bedroom floor with multiple gunshot wounds.

The front door of the house was full of bullet holes and was forcibly opened, while the other rooms were looted.

Martine Moïse, the 53-year-old wife of the president, was also shot in the attack. According to reports, she was transferred to Miami for treatment.

The White House stated that the United States is committed to sending senior officials from the FBI and the Department of Homeland Security (DHS) to Haiti as soon as possible to assess the situation and see what best they can provide.

When discussing active investigations, two sources from the US law enforcement agency who asked not to be named stated that various agencies are investigating the relationship between the United States and the killing.

A State Department spokesperson said: “We are aware of the arrest of two American citizens in Haiti and are closely monitoring the situation. For privacy reasons, we have no further comment.”

Duke wrote on Twitter: “We provide all possible help to find out the truth about the material and intellectual perpetrators of the assassination,” he said he had just spoken with Haiti’s interim prime minister, Claude Joseph.

Haitian officials did not explain the motive of Moise’s killing, nor did they explain how the assassin passed his security personnel.

Since taking office in 2017, he has been facing massive protests against his rule-first because of corruption allegations and his management of the economy, and then his increasing control of power.

Moise himself has spoken of the dark forces behind the unrest: other politicians and corrupt oligarchs believe that his attempts to clean up government contracts and reform Haitian politics are against their interests.

There are 17 veterans among the suspects

Investigators in Colombia found that between 2018 and 2020, 17 suspects had been retired from the Colombian army, General Luis Fernando Navarro, the commander of the armed forces, told reporters on Friday.

The Commissioner of the Colombian National Police, Jorge Luis Vargas, said that preliminary investigations revealed that 11 Colombian suspects travelled to Haiti through the resort city of Punta Cana in the Dominican Republic, which shares the island with Haiti. Paniola Island.

Former Governor Michaëlle Jean from Haiti joined Power & Politics on Thursday to discuss the assassination of Haitian President Jovenel Moïse and what this means for the future of Caribbean countries. 11:20

Vargas said that the other two flew to Panama by plane, and then flew to the Dominican capital Santo Domingo and Port-au-Prince.

In Haiti, the government declared a 15-day state of emergency on Wednesday to help the authorities arrest the killer, but has since urged companies to reopen.

Grocery stores, gas stations and commercial banks reopened on Friday, although the streets are still quiet, with only a few vendors selling things.

On Friday, more than 1,000 people gathered outside the U.S. Embassy in Port-au-Prince, after rumors that the U.S. might provide people with asylum.

“I have been there since noon, hoping to get asylum like everyone else,” said a woman outside the embassy who declined to be named.

The US State Department did not immediately respond to a request for comment.

Former Canadian Governor Michael Jean, who was born in Haiti, said that the investigation into the assassination requires international support because the country’s national police has been infiltrated by criminal organizations.

“I think the police themselves, the national police themselves, have been infiltrated by… criminal organizations so much that they need some help from independent political parties and foreign support to conduct this investigation,” Jean told CBC News network Power and politics Thursday.

Who is leading Haiti?

The murder of Moïse caused confusion about who is now the legal leader of this country of 11 million people, the poorest country in the Americas.

Haitian opposition politician Andre Michel said: “The assassination… has created a political and institutional vacuum at the highest level of the country.” “For this particular situation, the constitution does not provide for it.”

The 1987 Constitution stipulated that the President of the Supreme Court should take over. But no one currently holds this role. After the postponement of elections in 2019, there is also no parliament.

Just this week, Moise appointed a new prime minister, Ariel Henry, to succeed Joseph, even though he had not been sworn in when the president was killed.