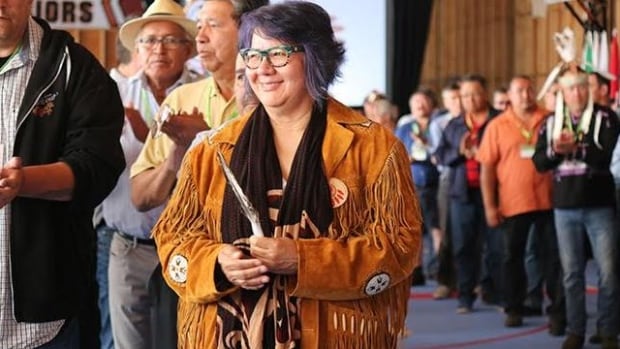 
After two days of five rounds of voting, RoseAnne Archibald, the former Regional Chairperson of Ontario, was appointed as the new country chairperson of the First Nations Conference.

Before taking AFN’s oath of office, Archibald said: “I am very grateful to be able to spend this historic moment with all of you.”

Archibald is a member of Taykwa Tagamou Nation (formerly New Post First Nation) in northern Ontario. She served as the regional head of Ontario for a three-year term.

Archibald said on a virtual candidate forum on Tuesday: “Before announcing my intention to run for the president of the country, I entered the ceremony and examined my heart and spirit. A spiritual call.”

“I realize that it is important for me to continue to play a leading role in the country.”

Archibald has a long history of assuming leadership positions. In 1990, at the age of 23, she became the first woman and the youngest chief of Taykwa Tagamou Nation (TTN).

After a nine-year hiatus from politics, she became the first woman elected as the head of Ontario in 2018.

“This is an emotional time, but if I have learned anything in my life, it is to get healing, strength and opportunity from difficulties,” she said.

“Now more than ever, we need a stable and strong leader who is committed to evolutionary change. I am that person.”

Emily Whetung of Curve Lake First Nation, Ontario is one of many chiefs supporting Archibald’s candidacy.

“During these difficult times, RoseAnne will be the national leader we need. She is like an aunt who will keep us on the right path and make sure we hear our voices,” Whetung’s virtual candidate on Tuesday Said on the forum.

“She is a powerful voice and will help us achieve change and build relationships to discover the truth and open the way for true reconciliation.”

The elections began on Wednesday during the 42nd Annual General Meeting of the AFN, and this year is actually hosted in Toronto by the territories of the Six Rio Grandes and the Credit First Nations Mississauga.

After the outgoing president Perry Bellegarde announced in December that he would not seek re-election, seven candidates are vying for the position. Bellegarde is a member of the Aboriginal Cubs of Saskatchewan and served two terms.

AFN stated that it represents more than 900,000 people living in 634 aboriginal communities and towns across the country.

To win, the candidate must obtain 60% of the votes of the 406 band council chairpersons or agents who have registered for the convention. The vote was extended to Thursday night.

After many reflections and consultations with my family and elders, I decided to support RoseAnne Archibald as the next chief of the country to recognize the importance of female leadership in the current situation. I encourage those who voted for me to support her.

Candidates Cathy Martin, Lee Crowchild, Kevin Hart and Jodi Calahoo-Stonehouse were eliminated after several rounds of voting due to the lowest number of votes. Nishnawbe Aski Nation Chief Alvin Fiddler withdrew from the Archibald game after the third vote.