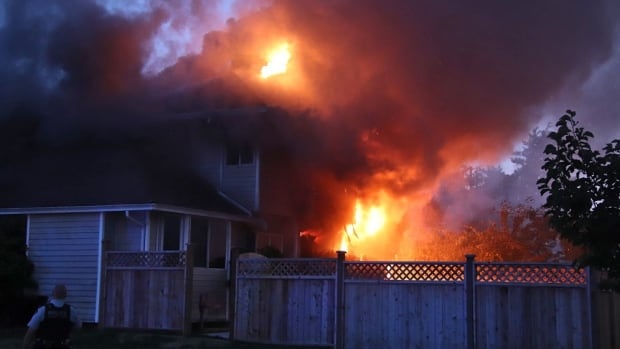 5-year-old child was found dead after a house fire in Surrey; homicide investigation


After a five-year-old child was stabbed late on Monday, a family member allegedly set fire to a house in Surrey, British Columbia, and left the child inside.

At around 9:15 pm Pacific time, the Royal Canadian Mounted Police was initially called to the house in the 15400 block of 94 Avenue in the Guildford area to help a stabbed woman.

A statement said that the 42-year-old woman fled the house and called the police, but the child remained in the house.

The police said the suspect who was involved in the stabbing set fire to the house and drove the Red Subaru away before the RCMP arrived.

The RCMP Sergeant said: “After the Surrey Fire was able to put out the fire, it is very regrettable that the child was found dead at home. We do need to investigate further to determine how the child died.” Eleanor Stuko .

The police stated that the suspect and the victim were related and believed that this incident was not random.

“All the people involved in this tragedy are part of the family,” Sturko said.

“We realized that this was a very heartbreaking incident, and many people, including first responders, felt the impact of this incident,” she continued. “Especially when we are dealing with incidents like this, we are talking about the death of a child, a person who is only five years old, which is very frustrating.”

“We want to encourage anyone struggling with the news to contact their healthcare provider. We extend our condolences to the families of everyone involved in this incident.”

The suspect is presumed dead

Sturko said there are no other children in the house. The woman was still seriously injured in the hospital.

Late Monday, the RCMP found the suspect’s car on the Mann Harbor Bridge. Investigators believe that the man has now died.

The statement stated that officers from the Coquitlam RCMP continued to search for the man in the Fraser River on Tuesday.

Sturko said the integrated homicide investigation team is working with the Surrey RCMP to “get the final answer and the cause of this tragedy.”