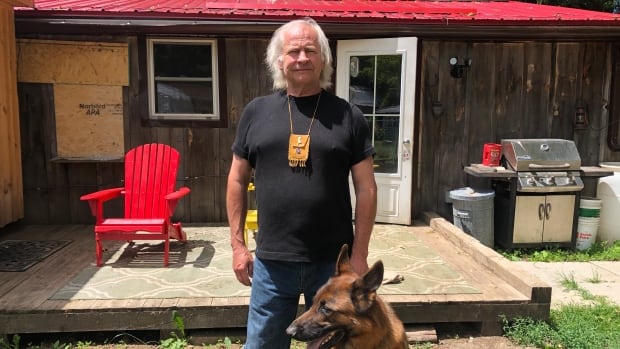 After living in poverty for many years, the former Aboriginal police finally paid US$630,000 in lost wages due to PTSD


Former Toronto police officer Ralph Thistle said he was finally able to install a well and running water in a cabin near Mt. Forest of Ontario, he shares with his service dog Rupert.

Last week, Thistle’s ten-year struggle with the Ontario Workplace Safety and Insurance Board (WSIB) ended when he opened his mailbox and found a series of cheques totaling 630,000 Canadian dollars.

“I opened the box and on the top of the flyer I could see the envelope from WSIB. Then I became numb,” he told CBC News.

One week after CBC News began investigating why WSIB waited more than 9 months to pay the money the Court of Appeals determined he owed Thistle, the money went into his 29-year policing career.

The money covers the time between 2007—when Ji suddenly resigned from the army, just a few months before he was eligible for pension— until he could retire next year.

Ji’s plight put him into poverty and homelessness.

In 2015, he finally moved into a cabin without running water.

Thistle said that because of his post-traumatic stress disorder, seeing the check was both relieved and overwhelming.

“I took the check home, took a photo in the envelope, and notified my family,” he said.

“I had to slow down my thought process and my emotions. I stared at the check in disbelief.”

WSIB’s public affairs manager said that when the arbitral tribunal awarded Thistle 15 and a half years of wage losses, it did not set the exact amount owed to him.

“We make every effort to provide rehabilitation and health services and pay benefits as soon as possible,” Christine Arnott told CBC News in an email statement. “In some cases, collecting all the information and documents needed to calculate the relevant payment may take longer than any of us would have hoped, especially for claims that go back many years.”

Thistle is a 64-year-old Metis who served as a senator from the Metis tribe in Ontario. He said that he has always relied on the generosity of the Aboriginal community, family and friends.

Drilling a well and letting tap water flow will be a priority.

“I have already called,” he said. “I was relieved to think it was coming.”

He said that the lost wages he recovered will help him and his two adult children live a better life.

“I am numb, but I am also grateful. This money is a second chance for me and my family.”

Thistle said that he finally received what he owed him, bittersweet.

“The money is great, but I still have PTSD,” he said.