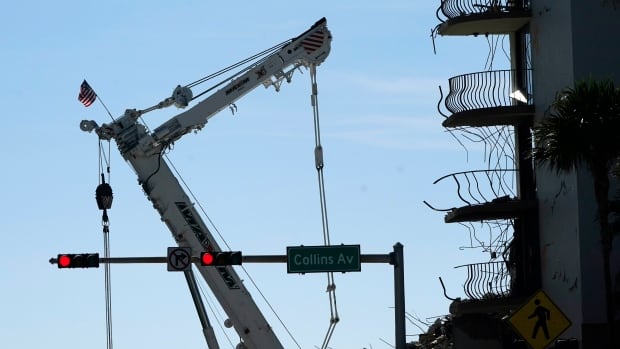 The collapsed Florida apartment building may be completely demolished on Sunday


On Sunday, demolition experts drilled holes for explosives as they were preparing to demolish the unstable but still standing part of the collapsed South Florida apartment building. This work has suspended search and rescue missions, but officials said it will eventually open up new exploration areas for rescue teams.

The decision to demolish the Surfside building was made after people were concerned that the damaged structure might collapse, which would endanger the staff below and prevent them from working in certain areas.

Miami-Dade County Mayor Daniella Levine Cava said at a press conference on Sunday: “Our priority is to collapse the building as quickly as possible, whenever it happens, and as safe as possible. “The demolition of this building in a controlled manner is essential to expand the scope of our search and rescue work.”

By Sunday morning, 80% of the drilling work had been completed, and the remaining structure may collapse later that night, Miami-Dade Assistant Fire Chief Raide Jadallah told relatives of those who were missing in the collapse.

That timetable—faster than originally anticipated, but still uncertain—aroused applause from families eager to restart the search. No one has been rescued alive since the first hour after the crash on June 24.

Searches in the Surfside building were suspended from Saturday afternoon so that workers can begin drilling work. Jadallah said the suspension was necessary because the drilling could cause the structure to fail, but a family member can be heard calling the news “destructive” in a closed-door briefing video, and one of the relatives broadcast it live on social media.

Up to now, rescuers have found the remains of 24 people, and 121 people are still missing. The Miami-Dade Police Department added Graciela Catarosi, 48, and Gonzalo Torre, 81, to the list of confirmed deaths on Saturday night.

Jadallah said that once the structure is demolished, the remnants will be immediately removed, with the goal of allowing rescuers to enter the garage area of ??interest for the first time. This can provide a clearer understanding of the possible voids in the rubble and the possibility of hiding survivors.

On Thursday, officials began to consider the demolition of the Champlain Tower, when part of the remaining building was moved, endangering rescuers and causing their work to be suspended for 15 hours.

Elsa increases the sense of urgency

The upcoming tropical storm Elsa adds to the urgency of these plans, and forecasts indicate that strong winds may enter the area on Monday. The latest forecast has moved the storm westward, mainly because South Florida has not been affected, but Robert Moleda, a meteorologist at the National Hurricane Center, said that starting Monday, the area may still be affected.

Jadallah said the purpose of the explosion was to move the rest of the building directly down and towards the side of the street, away from the existing pile of debris. He said that search and rescue work should resume within 15 to 60 minutes after the building is demolished.

The method of blasting is called “high-energy logging”, which uses a small detonating device and relies on gravity. Levin Kava said that this puts the building in place and controls the collapse in the surrounding environment.

No one is allowed to enter the buildings on the north and south sides of the collapsed structure. Levine Cava advised other nearby residents to stay indoors during the demolition and close doors, windows and any other openings that might allow dust to enter.

Several officials admitted that the tragedy continued during the July 4 holiday.

“It’s not like any Independence Day we have experienced before,” Levin Kava said.

But she added: “Patriotism is more than loyalty to the country. It is loyalty to each other-to our community, to those in need who we may never know the name or story, but we do it through compassion Connect with them. Elasticity.”