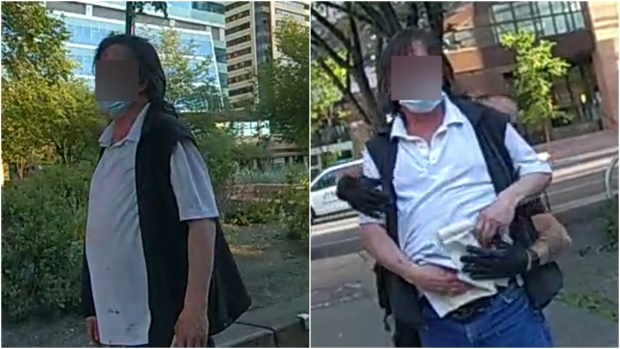 Officials said that at around 7pm on June 30, a man passed by James Short Park at 115 Southwest Fourth Avenue when he heard a man and a woman arguing.

When the man heard the woman tell her male attacker to “stop hitting her,” the bystander confronted the man.

At that time, the police believed that the suspect drew a knife and threatened the victim, causing him to retreat.

When the victim turned to escape, police said he tripped on the bumper of a car parked in the eastbound lane of Fifth Avenue at the intersection of Central Street.

The vehicle drove away, but the suspect overtook the victim and stabbed him. Soon after, he fled the scene.

Police and emergency personnel rushed to the scene, and the victim was taken to the hospital.

However, he died on July 3 from his injuries.

The Calgary Police are now releasing images of the victims, which were taken from the body cameras of responders, in order to allow people to recognize the clothes worn by the victims.

It is hoped that someone, perhaps even the driver of the vehicle in contact with the victim, can provide information about the case.

“People may have seen the quarrel, but don’t know that it led to such a serious and tragic result,” the chief of staff said. Martin Schiavetta, released with the Calgary Police Department Homicide Squad. “If you witness anything in the area that may be related to this incident, dash cam footage or any other information, please call us.

“Even the smallest information can be the most important detail we need to figure out what happened.”

To protect his identity, the victim’s face was hidden in the photo, because his identity could not be disclosed until after an autopsy on Tuesday.

The suspect is still being searched, but the police have not yet released a description.

Anyone who has information about this incident can call the non-emergency number 403-266-1234 to contact the police. You can also submit a reminder to the Fight Crime Hotline anonymously by any of the following methods: