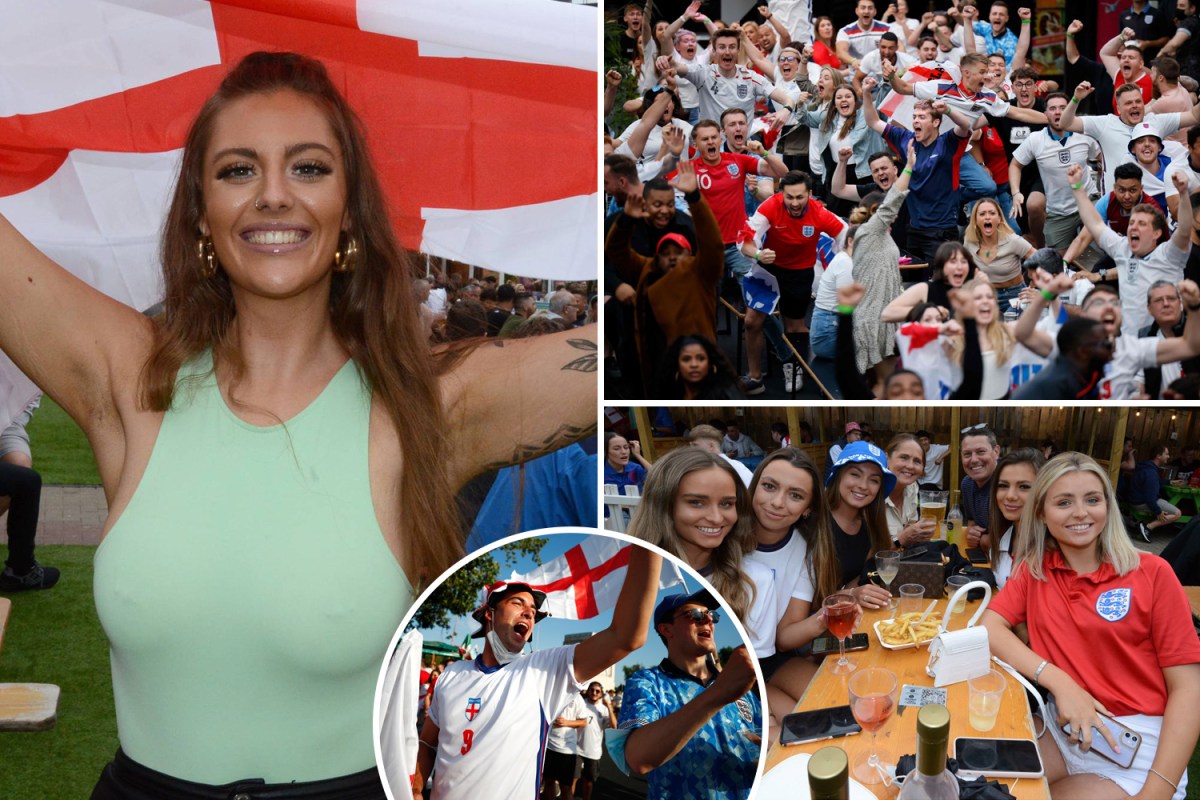 Millions went wild in packed pubs and parks across the country – while 5,000 fans roared on the team at the Stadio Olimpico in Rome.

?Get ALL of the latest England news and updates from Euro 2020

Harry Kane netted twice either side of Harry Maguire’s header before Jordan Henderson added a fourth against Ukraine tonight.

Jubilant fans sprayed booze and danced on tables during wild celebrations in fan parks up and down the country.

Spurs striker Kane gave England the perfect start inside four minutes when he latched onto a through ball from Raheem Sterling to slot home.

Maguire powered in a header to double England’s lead shortly after half-time before Kane netted a third.

The goal-rush without reply has put Gareth Southgate’s side into a semi-final showdown with Denmark on Wednesday night.

Ecstatic England fans inside the historic stadium belted out ‘Football’s Coming Home’ as they celebrated victory in our first Euro quarter final for 25 years.

Thousands of supporters bagged tickets – a mix of expats based in Italy and Three Lions fans arriving from across the globe.

And in the UK, supporters crammed into pubs, bars and parks across the country and sprayed beer as they celebrated a sensational game.

Whether in Rome or on home turf, the atmosphere couldn’t have been better – and Southgate’s side are yet to concede a sdngle goal in the tournament.

While skies were brighter in Rome – with the temperature reaching a gorgeous 31C – celebrations were just as wild at Britain’s boozers.

Tonight’s epic clash with Ukraine bookends a stunning week for the Lions.

It comes just days after Brits awoke with sore heads after a wild night of celebrations following the win over Germany, prompting plenty of calls in sick.

And tomorrow is set to be another write-off for millions – with celebrations set to go on well into the night.

He tweeted: “Come on England. You can do it. Good luck tonight.”

It looks like the football hero could be right – as those who doubted Kane were silenced just moments into tonight’s match.

The ace leapt into the air after his perfectly-executed touch sent the ball sailing into the net.

The remainder of the first half was quiet – but the second half saw goal after goal for England, with three in just minutes.

As revealed by The Sun, Jadon Sancho started for the Three Lions tonight – while Aston Villa’s Jack Grealish remained on the bench.

Meanwhile, UK cities are packed with punters. Supporters are spilling out of pubs and crowding specially-designated ‘fan zones’.

In Leicester Square, London, blue smoke is drifting over a huge crowd of chanting fans – while in Newcastle and Manchester, keyed-up fans are sinking pints.

Those who did manage to get away for the game have spent the day wandering the streets of Rome with drinks in their hands.

Die-hard fans were told not to fly out to Italy for the Euro 2020 game as the destination is on the travel amber list – meaning returning travellers face quarantine upon their return to the UK.

Anyone caught breaking Covid regulations could be hit with a £386 fine, and UEFA even cancelled all tickets sold to England fans living in in the UK over fears they’d flout the rules.

But double-jabbed, coronavirus-secure arrivals via France were allowed a 36-hour window without having to self-isolate.

And expats have flown in to Rome from Dubai, Spain, the Czech Republic and other EU countries.

Around 300 fans have arrived from the UAE alone – paying a whopping £700 for a return ticket – while another 200 are expected to join Brits living in Italy.

Amazingly, England has received backing from an unexpected quarter.

Germany fans still in Italy say they’ll back Brits in the match after they were swayed by the passionate support they saw at Wembley this week.

The Three Lions take on Ukraine at Stadio Olympico in Rome in its first Euro quarter-final for 25 years.

Supporters this afternoon marked the occasion by donning St George costumes in Newcastle, while in London, Prime Minister Boris Johnson posed for photograph outside 10 Downing Street with a giant St George’s flag.

Residents living on a football-mad estate in West London have put up more than 200 flags of their own – and they started singing “It’s Coming Home” at 7am.

The residents of Towfield Court in Feltham have spent all their free
hours decorating the estate in tribute to the Lions.

Elsewhere in the capital, huge crowds are watching the game on two screens at Trafalgar Square.

Bradley Hayden, 27, travelled into the city centre from Barnes to “be part of the atmosphere”.

“I thought, ‘Why not come down, get in the thick of it and see what it’s about’,” he said.

“I think we’ve got to have our trust in Southgate – he’s got us this far.

“The boys will do us proud tonight.”

But for others, the temptation to watch their team perform was too great.

Chris Pike, 32, flew into Rome from his home in Dubai with group of five friends.

He said: “There will be more England fans in the stadium than Ukraine and we will make as much noise as possible.

“I’ve got my England shirt and we will do all we can to cheer England on.’

Pike and friend Henry Mark are expecting to fork out £2000 for the entire trip after paying £250 for match tickets and £700 for their flight.

“It really is a one off and fantastic to be here in Rome and cheer on England. I will get my white shirt on later and we are looking to see if we can get any flags.”

And one fan has been left devastated after a Covid diagnosis meant he was unable to see his team play.

Gary Wills, 49, is British-born but now lives in Hamburg. He booked a flight, football tickets and a hotel – but tested positive for the deadly bug days after getting his second jab.

“For me, it was a real chance-in-a-lifetime thing,” he said.

Malcolm Clarke, chairman of the Football Supporters’ Association, said fans in England are disappointed about not being able to travel, but added: “We’ve got used to a bit of disappointment.”

He told Times Radio: “We haven’t been watching football live for a long time – club games and internationals (have) been missed, so to some extent, people got used to it.”

Mr Clarke joked that fans were just hoping “England can give us something to cheer about”.

Jack Francis, 20, from Southampton, travelled to Rome from France.

“I’m feeling confident for the game especially if we play the way we did against Germany,” he said.

“But with the lack of home advantage it will be interesting to see how we play in our first away game of the tournament, but hopefully the England fans here will do all they can to give the players a boost.”

Many of the tickets have been sold to some of the 30,000 expats who live in Italy and the FA returned its allocation of tickets for the 16,000-capacity stadium.

The Three Lions secured their place in the tournament’s last eight with an historic victory over Germany.

The win – courtesy of second-half goals from Raheem Sterling and Harry Kane – was their first over their old rivals in 55 years.