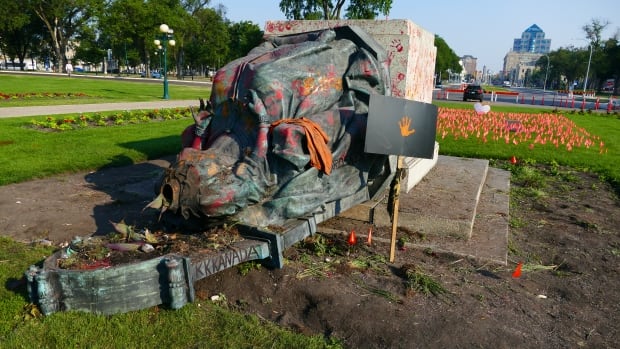 
Winnipeg Police Chief Danny Smyth (Danny Smyth) is expected to have the head of the Queen Victoria statue in the Manitoba Legislature removed and thrown into the Assiniboine River at 1pm Central Time The media gave a speech.

On July 1, at the end of the “Every Child Is Important” walk, the crowd pulled him down and overturned a smaller statue of Queen Elizabeth, which was further damaged.

The Canada Day parade was held to protest the country’s treatment of indigenous peoples under the colonial system—especially the system of forcing children to leave their families and go to boarding schools, where abuse is common and many people die.

The statue of Victoria first appeared in 1904, covered with a Canadian flag with the words “We Are Children” written in black markers, referring to children who died in boarding schools.

Sometime between Thursday afternoon and Friday morning, the head of the Victoria statue was removed and thrown into the river.

Police said on Friday that a man had been arrested and charged for causing damage to the legislature.

CBC News reporters saw that a man was electrocuted by the police with a stun gun before being arrested, while some bystanders threw objects and shouted swear words at the police.

The crowd was basically calm before the arrest, but the police had to push the crowd back to detain the man.

Governor Brian Pallister severely condemned those who demolished the statue in a statement on Friday, calling it a “major setback” for the reconciliation.

“It is unacceptable for individuals to destroy the public property of the Manitoba Legislative Building on July 1. For those who are struggling to achieve true reconciliation without taking any steps to advance this important goal, this is a major issue. Frustration,” he said.

“Those who commit acts of violence will be actively pursued in court. All leaders in Manitoba must strongly condemn violence and vandalism, and at the same time, we must unite and effectively advance reconciliation.”

Response from the person in charge of Pimicikamak

On Thursday, the chief of Pimicikamak Cree Nation in northern Manitoba called for understanding after the crowd sprayed paint and knocked down the statue.

Members of Manitoba Keewatinowi Okimakanak (MKO) said that although they did not tolerate violence, they understood why the statue was demolished and the tension between the people participating in the rally and the police.

“I will not condemn people because they are hurt mentally and emotionally, because the truth revealed is hurtful and destructive,” Pimikamak Chief David Monias (David Monias) Speaking at the MKO press conference on Friday.

Manitoba Keewatinowi Okimakanak is one of the few organizations involved in different walking activities that started at the Canadian Museum of Human Rights and ended in the urban reserve of Peguis First Nation on Portage Avenue, Dominion Street. According to the news released by MKO, the participants who participated in the walk called No Pride in Genocide did not participate in the demolition of the statue of the Manitoba legislature.

The first treaty country is composed of seven aboriginal people who signed the first treaty. They also participated in the organization of Wuao in the genocide, keeping their distance from the events of the legislature.

“We are committed to holding peaceful demonstrations and actions, and we thank all participants for their cooperation and participation in this important walk. [Indian residential school] Awareness,” the organization said in a press release.

CBC News asked the provincial government to comment and was told that a statement was about to be issued.