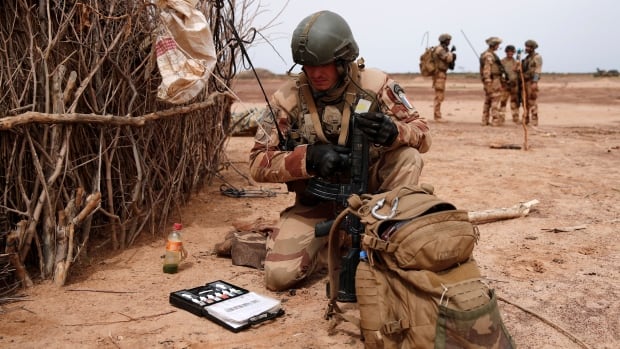 Why France lost the “great game” in West Africa


The British used to call it the “Great Game”—the military and political wrestling of great powers in Afghanistan, India, and southern Russia in the late 19th century.

Other big players, such as Russia, especially China, are entering.

He said: “France’s role is not to permanently replace the local states.”

He then said that France will begin to withdraw some of the 5,100 French troops fighting Islamic extremists in Mali, Niger and Burkina Faso in the coming months.

“It’s a failure, it’s obvious,” Thierry Vircouron, an African expert at the French Institute of International Relations, said in an interview.

“The French lesson is not to get involved in wars that you can’t win.”

“The French actions must be viewed in light of the US decision in Afghanistan. If the Americans did not start negotiations with the Taliban and then announced their withdrawal, the French government might not make the decision it made.

According to data from ACLED (Data on Locations and Events of Armed Conflict), more than 6,000 civilians died in 2020, a 30% increase from the previous year. The French have seen 55 soldiers killed, and the troops of Mali, Niger and Burkina Faso have lost thousands more in eight years.

Extremists control the center of Mali and large areas along the border between Niger and Burkina Faso.

Despite the urging of the French, the large UN military contingent stationed in Marigao is still the case. There are 13,000 soldiers patrolling there. For the 18 months leading up to September 2019, Canada has been part of the task force.

Assiminar Ag Rousmane is “quite pessimistic.” He is the head of Azhar, a non-governmental organization located in the capital of Bamako, which aims to help civilian victims of the conflict.

“I deal with local people. We traveled from village to village all over the country and we can see that the country cannot control it. It is almost bankrupt,” he said in an interview.

“There are already some unsafe towns near Bamako. Some places are the law of the jungle.”

Assiminar confirmed an open secret that the Malian army and local leaders are in informal negotiations with extremist organizations to “liberate” some areas.

“They are at least seeking a minimum security guarantee. This is very detrimental to the local residents because the rebel extremists have requirements. This means closing schools and even sharia law.”

The long chapter of French colonial and post-colonial rule is coming to an end. France established the West African Federation in 1895 and is composed of eight modern countries-Senegal, Mauritania, Mali, Niger, Burkina Faso, Côte d’Ivoire, Benin and Guinea. In fact, this is a huge colony.

After these countries gained independence in the late 1950s and early 1960s, the “federation” was replaced by something called “Francafrique”. In these countries, this is a sometimes paternalistic and sometimes very tough form of supervision, supported by French troops stationed in several of these countries.

In this way, French-backed leaders often hold power for many years, and bilateral government agreements with France are usually secret, allowing French companies to prioritize the development of the country’s natural resources.

Do not restore reputation

France even established the West African currency CRA franc (CFA Financial Community) with the support of the Central Bank of France. But every country must deposit half of its foreign exchange reserves in French banks.

The French National Assembly only voted last year to terminate the rule.

Operation Crescent Dunes was a military offensive against Islamists in sub-Saharan Africa, which was supposed to restore the prestige and influence of France. Instead, it did the opposite.

The military coup that took place in Mali last year was not one but two, not to strengthen democracy.

The National Audit Committee of France, Cour des Comptes, criticized France’s strategy in a report in April. It stated that the annual cost of military missions has risen to US$1.8 billion, while funding for aid and development has fallen to US$495 million per year in eight years.

“The priorities announced in the sub-Saharan region have not yet been translated into reality,” the report said in language similar to a diplomatic dagger.

Others have already noticed.

In 2019, Russian President Vladimir Putin invited heads of African government and heads of state to his southern palace in Sochi. The response was overwhelming: 43 people attended.

According to Vircoulon, the Russians have been conducting “African military hunts” since then, offering to sell their services and weapons to the troubled government.

Russian mercenaries, the so-called Wagner Group, funded by a wealthy businessman close to Putin, have entered the Central African Republic and expelled the French army.

The Russians are also making similar proposals to governments like Mali.

According to Vircoulon, this follows the model developed by the Russians in Libya and Syria. The Wagner Group moved in and then cooperated with the Russian Armed Forces to train soldiers, establish bases, and expand Russia’s influence. He said that in a few years you can see them in Mali or Burkina Faso.

The trigger point is Ukraine. Russia invaded the Ukrainian territory of Crimea in 2014 and then supported the rebels in the ongoing war in eastern Ukraine. The West responded with economic sanctions on the Kremlin.

“Due to Western sanctions, we are once again in a position to compete with Russia. They are using all the available cards. Therefore, creating problems for France in this part of Africa is part of the strategy,” said Vikullen.

But the Russian invasion was just a sideshow. They have no economic influence.

Mandila Bawanding, an expert on China-Africa relations in South Africa, said in an interview: “China first seeks a common political stand with African leaders and plays a role in Africa’s opposition to Western hegemony and colonialism.”

“But now the trump card is money. China is really willing to provide large amounts of loans for large industrial and infrastructure projects that can truly unlock Africa’s potential. Their approach is tough.”

Unlike Western lenders, they don’t ask too many questions about good governance and how the funds will be used.

“A lot of China has been criticized by the West, but this does not prevent African countries from relying on China,” Bagwandeen said. “You will have to write a check to be taken seriously.”

In the new African game, the most powerful weapon is money.