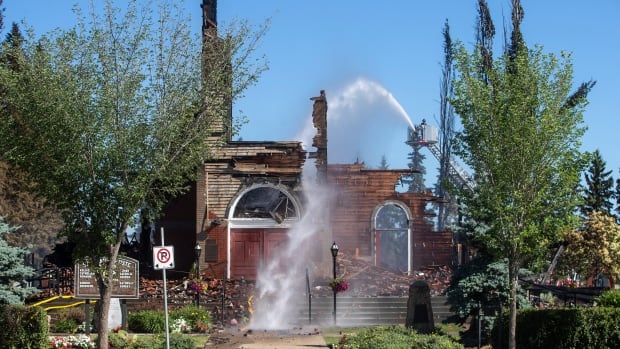 “Unacceptable and Wrong”: Trudeau condemns the attack on the church


Canadian Prime Minister Justin Trudeau today condemned the wave of destruction and arson attacks targeting Catholic churches across Canada, saying it was not a solution to the trauma caused by boarding schools.

Trudeau told reporters after visiting a vaccination clinic in Ottawa, “We are seeing the rise of intolerance, racism and hatred across the country.”

He told reporters: “It is unacceptable and wrong to see acts of destruction and arson across the country, including acts against the Catholic Church.”

Trudeau said he understands the anger of many people across the country, because several aboriginals reported finding unmarked graves at the site of the former boarding school — but setting the church on fire was wrong.

Trudeau said: “I can’t help thinking that burning churches actually deprives those in need of grief, healing and mourning where they can truly grieve, reflect and seek support.”

“We should not lash out at buildings that can provide comfort to some of our compatriots. But we should, every day, each of us, commit to the hard work we need to do to actually rebuild a building that reflects the terrible intergenerational trauma and today The road ahead of the reality of suffering, this is our common response.”

Before Trudeau’s comment, churches in different parts of the country were burned or painted with information about the recent discovery of hundreds of unmarked graves at the former boarding school.

The federal government recently refinanced the Security Infrastructure Program, which works with religious institutions to improve security. In the 2020 Autumn Economic Statement, the government announced that it plans to invest US$13 million in the plan over the next five years.

Trudeau said he understands the anger of the Canadian Aboriginal community.

“Anger…is real,” he said. “People have experienced decades or even generations of intergenerational trauma. The result and institutional racism have brought great difficulties to the indigenous people of this country. This is also the legacy of the boarding school.

“I certainly hope that we can complete the settlement in five or six years,” he said. “As a government, we have done a lot of efforts to determine this path to reconciliation, but there is still a lot of work to be done.

“The relationship between Aboriginal and non-Aboriginal Canadians will take generations and centuries to break, but it will take several years to resolve it all.”

Trudeau held a press conference today because several towns in British Columbia are threatened by wildfires.

The Prime Minister stated that the federal government is working with British Columbia and the Aboriginal people to help these communities.

Trudeau warned that Canada is experiencing more extreme weather events, such as floods and forest fires, and these threats will persist unless the country addresses the issue of climate change.

When asked about the new regulations coming into effect next week — which will ease the isolation requirements for fully vaccinated travelers returning to Canada — may lead to an increased risk of COVID-19 cases, Trudeau said he believed border officials could Deal with this situation.

However, he declined to say when he plans to open the Canadian border to Americans.