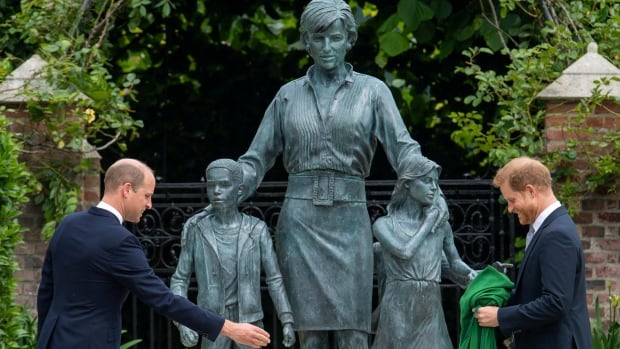 
Hello, royal watchers. This is your regular dose of royal news and analysis. Reading this online? Sign up here to get this delivered to your inbox.

From our CBC colleague in London, Salimah Shivji:

Prince William and Prince Harry walked into the newly redesigned Sunken Garden at Kensington Palace shoulder to shoulder on Thursday, both relaxed and smiling, as the cameras clicked.

Many royal watchers likely breathed a sigh of relief at the outward show of unity.

There has been increased tension between the brothers since Harry and his wife, Meghan, Duchess of Sussex, withdrew from royal duties and moved to California last year, and more particularly, since an explosive interview with Oprah Winfrey in March, in which the couple accused the Royal Family of racism and indifference.

But at Thursday’s low-key ceremony to unveil a long-awaited statue of their late mother, Diana, Princess of Wales, on what would have been her 60th birthday, the brothers kept it civil.

“We all thought Harry and William would present a united front,” said Roya Nikkhah, royal editor at The Sunday Times.

“There were plenty of smiles as they were arriving together, walking in,” she said. “And I think the images from that will be quite powerful in trying to overturn the public image of the brothers, which has been divided for so long.”

But Nikkhah said one brief, cordial public appearance doesn’t mean everything is rosy between the two.

“No one can escape the fact that underneath the images, there is still tension there. They live on different continents. There’s still a big gulf between them.”

That’s a far cry from when they commissioned the bronze statue four years ago, on the 20th anniversary of Diana’s death, to celebrate her legacy.

Back then, “they were in lock step, they were as close as two brothers can be,” Nikkhah said.

No longer. William and Harry reportedly barely speak to each other these days. But Thursday was about their mother, and the princes kept the spotlight squarely on Diana — and the effigy in her memory.

The statue, which has received mixed reviews in the media, depicts Diana surrounded by three children, meant to represent the impact of her humanitarian work.

The unveiling in the palace’s gardens was the first time William and Harry had been seen together since the funeral of their grandfather, Prince Philip, in April.

They didn’t make any speeches, but the brothers released a joint statement, saying they were spending the day remembering their mother’s “love, strength and character — qualities that made her a force for good around the world, changing countless lives for the better.”

“Every day, we wish she were still with us, and our hope is that this statue will be seen forever as a symbol of her life and her legacy,” they said.

Sculptor Ian Rank-Broadley said adding children to the statue was to highlight Diana’s character and her humanitarian work. He called the statue a “collaborative effort,” with the brothers sharing memories and anecdotes over the years that helped the artist get a clearer sense of Diana.

“For all that the princess was a very public figure and, in many respects, an icon, she was somebody’s mother,” said Rank-Broadley, and that’s why he “paid the greatest heed to both princes and what they had to say” in creating the depiction, hoping it might “give them some sort of comfort or solace.”

Rank-Broadley also remarked “one certainly got the feeling that she [had] an enormous sense of fun.”

That sense of fun is also what Graham Dillamore recalls.

The deputy head of gardens for Historic Royal Palaces used to be the head gardener at Kensington Palace in the late 1980s, when Diana and Prince Charles were living there with their two young boys. He’s also one of five gardeners who spent hours planting thousands of Diana’s favourite flowers to bring the redesigned Sunken Garden to life.

Dillamore stood in the garden Thursday and described how, decades ago, Diana would often jog past the gardeners and stop to chat and share a joke, even in the early hours of the morning.

“You could just hear the birds chirping in the background and the princess would come skipping down those steps behind me,” he said.

“Singing some Abba song which I couldn’t stand,” he said with a laugh.

Dillamore said he was honoured to work on the garden’s new look and hoped Diana would have liked it, with her statue at the forefront.

Steps from the garden, in Kensington Palace’s Orangery, is an exhibition that also focuses on Diana’s legacy of warmth.

Royal Style in the Making features gowns and outfits worn by the Queen Mother and Princess Margaret, but the exhibition’s centrepiece is Diana’s wedding dress, on loan from her sons.

The iconic dress, with its taffeta ruffles, puffed sleeves and 7.6-metre train, is imprinted on many minds, even 40 years after the wedding that was broadcast live and watched by millions around the world.

But it’s a sketch of another dress that the curator points to when asked about Diana’s legacy through fashion. Designed by David Sassoon, it’s royal blue with bright pink and yellow flowers. She called it her “caring dress.”

“It was her favourite dress,” said the exhibition’s curator, Matthew Storey. “She wore it time and time again, so much so that the press told her to stop wearing it. She wasn’t going to have any of that because she knew that children responded to those bright colours.”

Diana even ditched the original design of the dress, which included a wide-brimmed hat, because she felt it got in the way of cuddling a child. On humanitarian visits, she would often wear chunky necklaces, which she knew children loved to grab.

“For me, this really unlocks an understanding of what Diana was doing with her style, because she was thinking about how her clothes would communicate and the impact she would have on the people she met,” Storey said.

That impact is keenly felt at the makeshift memorial outside the palace gates, where passersby put up balloons and flowers for what would have been Diana’s 60th birthday.

“Diana meant everything to everybody,” Chris Boyd told CBC News as she looked at the photos posted near the memorial. “She had such feeling, she just knew what people felt.”

Boyd said she hoped the brothers would find a way to reunite, with the statue ceremony for Diana as the impetus.

Her friend Elisabeth Leal, who lives nearby, agreed.

“The boys, Prince William and Harry, I hope they will follow through with her legacy, which is amazing,” she said.

“But Diana is Diana.”

Looking into the finances

While the Royal Household’s annual financial accounts for 2020-2021 offered insight into everything from staff salaries to the impact of COVID-19 on its income, two other high-profile issues mentioned in the report garnered much of the public attention that followed its recent release: diversity of staff and funding for Prince Harry and Meghan.

The Sovereign Grant Report revealed that 8.5 per cent of the Royal Household staff have an ethnic minority background, with a target of 10 per cent for next year.

The palace said it was “not where it would like to be” on staff diversity, the BBC reported.

“It is not that we have not been progressing diversity and inclusion initiatives during this period, it is that simply the results have not been what we would like,” a palace source told the BBC.

Diversity and issues of race have been of concern particularly since Harry and Meghan’s interview in March with Oprah Winfrey.

The BBC’s royal correspondent, Jonny Dymond, says change within the royal staff may be difficult to achieve.

“While public funding has remained steady, the extra money the monarch made from things like paid visits to the palaces fell by half [last year],” he wrote on the BBC website, noting a 10-million pound shortfall was covered by cutbacks and a recruitment freeze.

“Without new faces, it is difficult to change the profile of household staff and the palace reckons that COVID restrictions will hit its supplementary income for some time to come.”

The Sovereign Grant Report also noted that Harry and Meghan made a 2.4-million pound repayment to cover costs of refurbishing Frogmore Cottage, their official residence before they stepped back from the upper echelons of the Royal Family. (That money also covers rent to keep it as their home in the United Kingdom at least until next March.)

Much public attention on the report also focused on details about funding for Harry and Meghan that was covered by Harry’s father, Prince Charles. In the interview with Winfrey, Harry complained of being cut off from the financing, and in the aftermath of the Sovereign Grant Report, there was confusion about the timing of that.

“Regardless of the precise timeline, both the Duke and Duchess enjoy significant private wealth compared to the ordinary person, and so this comes across as being quite tone deaf,” Craig Prescott, a constitutional expert at Bangor University in Wales, said via email.

Plus, added Prescott, there’s a political aspect to all this.

“The funding the Duke and Duchess received is derived from the Duchy of Cornwall, which is Prince Charles’s private estate,” Prescott said, noting the estate is large and varied, including tenant farmers who don’t make big sums of money.

“For the broader monarchy, it would have been a disastrous look if the Duchy of Cornwall raised rents (as landlords do from time to time), while the Sussexes enjoy a celebrity lifestyle in North America.

“It was always unsustainable for the Sussexes to continue to receive this funding (as they initially indicated they wanted on sussexroyal.com), and not conduct a fair share of royal duties.”

Another virtual visit to Canada

Queen Elizabeth was back in Canada virtually the other day, this time to officially present a special flag to the Canadian Armed Forces Legal Branch.

During the virtual audience from Windsor Castle, the Queen presented the Royal Banner (which was actually already in Ottawa) to Rear Admiral Geneviève Bernatchez, the forces’ judge advocate general.

“I hope that the banner will be able to be shown around,” the Queen said during the call.

The CAF Legal Branch is marking its 100th anniversary, and the flag was granted to honour that occasion.

The virtual visit also gave the Queen the chance to hear about work the Armed Forces have done in Canada over the past year, as well as the experience of Maj. Angela Orme, a member of the legal branch who is in Bahrain working with the Royal Canadian Navy in efforts to deter the illegal drug trade.


“We’ve had a very successful tour,” Orme told the Queen, noting the interdiction of narcotics worth $160 million US over 51 operations.

The chat got a little more personal as Orme, who got her military start as a reservist with the Calgary Highlanders, described the difficulties of being away from her two young children, and mentioned that she told the older one she was off “fighting pirates.”

The Queen seemed to appreciate Orme’s efforts at explaining something a small child would otherwise have trouble understanding.

Queen Elizabeth has been colonel-in-chief of the CAF Legal Branch since 2013.

“Ultimately, what shapes our childhood not only shapes us as adults, but also the society we want to form.”

— Kate, Duchess of Cambridge, as the Royal Foundation Centre for Early Childhood is launched, continuing her efforts to focus on early childhood development.

Sign up here to have The Royal Fascinator newsletter land in your inbox every other Friday.

I’m always happy to hear from you. Send your ideas, comments, feedback and notes to [email protected]. Problems with the newsletter? Please let me know about any typos, errors or glitches.