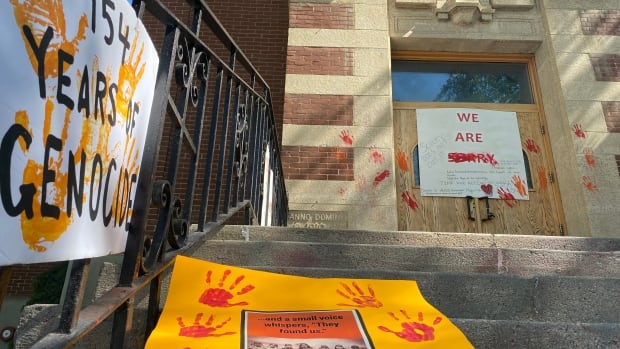 Percy Miller stopped for a walk in downtown Saskatoon on Friday morning to look at the logo, children’s shoes and red handprints on the door of St. Paul’s Union Cathedral in the Roman Catholic Church.

He said the Catholic Church needs to do the right thing and pay the entire $25 million promised to boarding school survivors in 2005 as part of the settlement. So far, churches across the country have only raised $4 million. Church lawyers argued in 2016 that their transaction only requires them to “try their best”, so the judge ruled that they can stop raising funds.

When asked about the growing calls of Catholics to boycott the masses this Sunday, Miller shrugged and said he was not optimistic.

“It’s good, just show that they support the indigenous people,” Miller said, and several of his family members were forced to attend boarding schools. “It depends on them. But you know, that’s how it is.”

The parishioners can become “the greatest champions”

Sovereign Indigenous Nations President Bobby Cameron, Kinistine Soto Chief Felix Thomas and others call on Catholics to stay at home this Sunday and every Sunday until the money is paid to help survivor.

They also hope that the church will publish all the boarding school documents, and that Pope Francis will come to Canada to apologize for the church’s role in running the school, as the Truth and Reconciliation Commission called for action.

“They can still pray silently at home. This will send a strong message,” Cameron said.

Thomas said that survivors need everyone to fight for them.

“We need more champions. The greatest champions in this area can be the congregation. This is what they can do to show this kind of unity instead of showing up in church on Sunday,” Thomas said last month.

“Catholics need to stay home and wash off their moral compass,” said Byron Lewis, chief of the Okanagan Indian Band. “that [boycott] The information will be passed to the bishop, the archbishop, and then passed up, up and up. “

Louis said it was disturbing that church officials claimed that they had no money for survivors to build and renovate churches across Canada.

“Is this what Jesus would do?” he said.

Louis said other chiefs in the area felt the same way. The Union of Indian Chiefs of British Columbia issued a statement this week that included calling on the church to pay the remaining $21 million to the survivors.

Louis said that he also plans to propose a motion to cancel the annual subsidy of US$17,000 provided by the indigenous people to the local Catholic diocese for church maintenance and repairs.

It is unclear whether the bishop intends to raise more funds

On Thursday, Andre Bell, a student at the University of Saskatchewan’s School of Indigenous Civil Law, spoke at an orange shirt event supporting survivors in downtown Saskatoon. He said that the main focus still needs to be on the federal government.

But Bell says that Catholics can play a big role.

“I know it must be difficult for them, it is difficult to admit that their church was involved in the genocide,” he said.

“If they want to stand with us and do it right, it will be welcome.”

In a statement emailed to CBC News on Friday afternoon, an official from the Conference of Catholic Bishops of Canada stated that it is unclear whether the bishop intends to renew his efforts to raise the remaining $21 million.

“The bishops of Canada have been working closely with Aboriginal people and communities on multiple levels. They are sincerely willing to work together on options and priorities so that any actions and commitments made during this collaborative journey are truly in line with Needs and desires of the indigenous peoples who work with them,” the statement read.

On Friday, in a park just 100 meters from the Union Cathedral in downtown Saskatoon, Nancy Greyeyes and her friends dismantled the tent and other tents set up for the July 1 event. tent.

“It’s a whole thing,” she said of the Catholic Church. “But they can change it from the inside. Don’t just say sorry. Do something to make it right.”