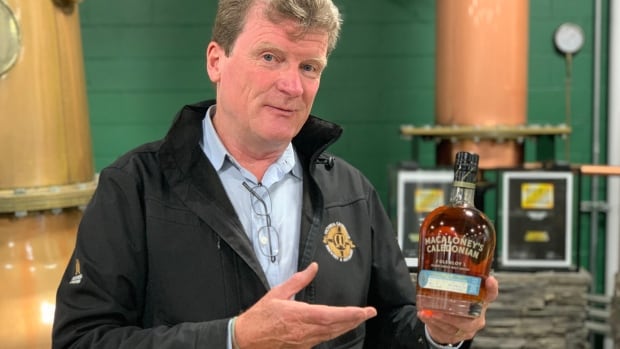 
In the golden letters, the label clearly indicates that it is a Canadian-made whiskey, but the Scotch Whisky Association stated that this is not enough. It is taking the British Columbia distillery that produces single malt whiskey to court, forcing it to change its brand. .

“This is nonsense,” said Graeme Macaloney, who owns and operates the Victoria distillery that produces Macaloney’s Caledonian whisky.

“To be honest, this is really a boring and extremely destructive lawsuit.”

The Scotch Whisky Association, which represents the Scottish industry and protects its brand globally, filed a lawsuit in the Supreme Court of British Columbia in March.

It said that Macaloney uses a word synonymous with Scotch, “may deceive and mislead consumers in British Columbia by mistakenly thinking that the defendant’s whiskey is Scotch.”

Macaloney was born in Scotland and he said he would not give up his surname.

“This is total nonsense.”

The name of the winery is a reminder of the past of British Columbia, when a large part of it was called New Caledonia and was regulated by the Hudson’s Bay Company.

Macaloney said he would call it New Caledonian whiskey, but worried that this would cause customers to confuse it with French Polynesia, also known as New Caledonia. He also called it island whiskey because it was produced on Vancouver Island.

Macaloney said that when he founded the distillery five years ago, he was transparent to the Scotch Whisky Association and how he branded his whiskey and worked with them to comply.

He said that in order to satisfy the association, he changed the packaging and made sure that the Victoria address on the label was prominent. He added a golden relief map of Vancouver Island to the box.

The situation of “David and Goliath”

He was angry at the suggestion that Canadian wineries should not use Scottish terminology in marketing.

“Canadians have the right to celebrate their Scottish heritage like the Scots. We sent 16 regiments to World War I and World War II. The Highland regiment wears tartan. Every province has tartan,” Macaloney Say. “They tried to tell us that we can’t use…Scottish names. This is an insult to Canadians.

“This is the case of David and Goliath.”

Watch | Graeme Macaloney strives to retain the name of his Canadian-made whiskey:

Graeme Macaloney is fighting the Scotch whisky industry to retain the name of the whiskey he made in Canada. 1:20

According to federal regulations, Macaloney does not allow his product to be called “Scotch” whiskey, and he does not. These rules also prohibit winemakers from calling sparkling wine Champagne unless it comes from the Champagne region of France.

Industry Canada, which oversees the Canadian Geographic Index, said it was unable to comment because the matter was being heard in court, but the ban was aimed at a company that used the term “Scotch Whisky.”

In a statement to CBC News, the Scotch Whisky Association stated that it “has been taking action in our global markets to prevent the use of the Scottish Designation of Origin on non-Scotch whiskies.”

The association believes that it has a responsibility to ensure that winemakers in other countries do not take advantage of the international reputation of Scotch whisky. It does not want the company to use words such as “Caledonian” or Macaloney’s last name on the label.

“In this case, we oppose the company’s use of certain words and terms closely related to Scotland in its whiskey, and the company’s whiskey is actually a Canadian product. This may confuse consumers.”

The association also stated that it can resolve the problem without further legal action.

Montreal-based trademark attorney Ekaterina Tsimberis stated that the association’s job is not only to protect its members, but also to protect consumers from possible false statements.

“This is an interesting case because it almost connects the old world with the new world and the interrelationships between the people who came to this country as immigrants.”

She said that the association’s legal arguments needed a leap, because it assumed how consumers in British Columbia understood the use of the term Caledonian.

This is not the first time the Scotch Whisky Association has brought a Canadian brewer to court. In 2009, the Federal Court of Appeals ruled that Cape Breton whiskey manufacturer Glenora was allowed to continue to use the term “Glen” to market its single malt whisky. To this day, it continues to do so.

Regardless of the legal prospects, the association’s actions have angered whiskey enthusiast Phil Nelson’s enthusiasm for traditional Scotch whisky.

The two and his wife Bridget sat outside the beer garden of Macaloney’s brewery and expressed disgust at the legal actions taken by the Scottish group.

“I’m really angry, they are exercising their power. Now many wineries in Scotland are owned by multinational companies… and they have so much money and so much power,” Nelson said.

“I don’t think it’s wrong for them to force small Canadian businesses like this to jump through the hoops. So I think all it does is push me to buy more local products.”

Nielsens believes that the association should abandon this matter and move on.

McCone thinks so too. He didn’t want to argue in court, but wanted to work with the association to promote the history of Scotch whiskey and the new traditions on this side of the Atlantic to the public.

“I think they are out of touch. They are not aware of the wave of craft breweries. In the past 10 years, Scotland has only 16 new breweries, in North America, 2,000, and all these Irish and Scottish diaspora have their wine The factory calls what they want,” he said.

“Faced with hundreds of names, what are they going to do now?”