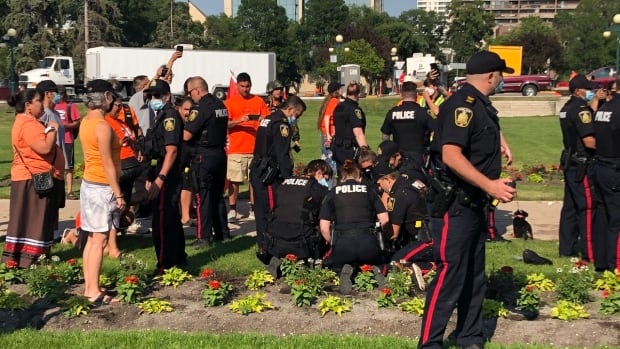 
On Thursday, a group of people tore down a famous Queen Victoria statue at the Manitoba Legislative Council grounds. Police shocked a man with stun guns and arrested him, while others threw objects at them and shouted expletives.

The exact circumstances of the arrest are still unclear, and the arrested man may be angry with those who pulled the statue down at about 4 pm Eastern time.

Before the man was arrested, the crowd on the venue was basically calm, and the police had to push the crowd back to detain him.

A Winnipeg police spokesperson declined to comment immediately, saying that information may be released on Friday.

Reason is a destination Every child is important go On the afternoon of Canada’s National Day, protests against the influence of the Canadian boarding school system.

The statue was painted with red handprints. After the statue was tossed down, a slogan that read “We used to be children. Take them home” leaned on the base of the statue.

Dozens of people surrounded the monument, many wearing orange shirts to commemorate the indigenous children who were sent to boarding schools. Some people wrap it up with rope and then pull it off the base.

This statue first appeared in 1904 and is covered with a Canadian flag with a black marker that says “We are children”.

A smaller statue of Queen Elizabeth II was also pushed down on the east side of the site and was covered by yellow ropes.

The collapse of the statue occurred on Canada’s National Day. Thousands of people took to the streets of the city to pay tribute to the victims and survivors of the boarding school.

Watch | The statue of Queen Victoria collapses in the Manitoba Legislature:

On Thursday afternoon, a group of people knocked down the statue. (Courtesy of Belinda Vandenbrook) 1:27

Our people demolished the Queen Elizabeth statue in Winnipeg? pic.twitter.com/Ppsxg4sfeW