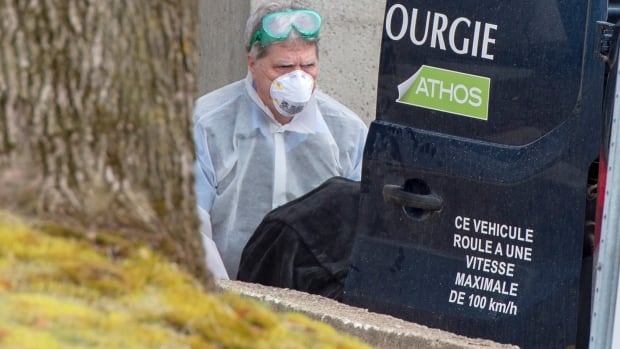 
In Quebec’s worst-hit long-term care home, during the first wave of COVID-19, a doctor in charge of more than 30 patients said that the Ministry of Health has an order to avoid sending residents to hospitals.

Therefore, Dr. Tu Anh Nguyen said when investigating the death of a resident of the family on Wednesday that she called the patient’s family to discuss what kind of care they should receive when they are in distress.

Nguyen testified on the death of 94-year-old Anna José Maquet on the last day of the investigation, a resident of CHSLD Sainte-Dorothée in Laval. The investigation is part of a larger public investigation led by coroner Géhane Kamel, which investigated the death toll in elderly homes in the province.

When Kamel asked if any ministries ordered to reduce the level of care for elderly patients, Nguyen said no.

But she admitted that after talking with her family, only 3 out of about 30 patients received top-level care.

Nguyen said she told Maquet’s family that it was better to keep her at home in case she fell ill rather than transfer her to the Cité-de-la-Santé hospital in Laval.

“I explained to them that considering Maquet’s general health, we will treat her on the spot and prioritize her comfort. It’s better to have staff who know her, rather than someone who she doesn’t know and can get. Bed sores in the emergency room and COVID infection,” Nguyen told the investigation.

“In retrospect, we know that the opposite was true.”

Last week, Maquet’s son Jean-Pierre Daubois testified that if his family knew that this meant she would not get the level of care she needed, they would not agree to take comfort measures.

In the past week, the investigation learned that Sainte-Dorothée and the health committee (CISSS de Laval) that oversee it were insufficiently prepared, leading to the first wave.

It also heard how the provincial government has concentrated its resources on equipping hospitals and even transferring personal protective equipment to them from long-term care homes that will eventually be most affected by the pandemic.

“The enemy came in through the back door, and we were unarmed,” a witness and a nurse told Carmel last week.

Maquet passed away on April 3, 2020 because she was choked by some water. She took a mixture of painkillers and tranquilizers prescribed by Nguyen.

Kamel selected six CHSLDs (the French acronym for public long-term care homes in the province) and a private residence for inspection. The death toll in each institution is being investigated.

Sainte-Dorothée is one of them. A total of 102 patients died in this residence, the highest number of deaths in long-term care homes in the province; 211 residents and 173 employees were infected with COVID-19.

Carmel said that the goal of the investigation is not to determine guilt, but to make recommendations to prevent future crises.

Another doctor, Dr. Thérèse Nguyen, who testified on Wednesday, who was on call when Maquet died, confirmed that she had allowed nurses to reduce the amount of oxygen in ventilators for some COVID patients to avoid creating aerosols that could infect staff. Not equipped with N95 masks.

On April 3, 2020, nurses used their “right to refuse”, and if they approached residents whose equipment produces aerosols, they would require N95 masks. No such mask was sent to Sainte-Dorothée.

In an interview with CBC at the Laval Court, Patrick Martin-Ménard, the lawyer for Marquette’s son, said: “This decision was made without taking into consideration the interests of the patient.”

“If the patient needs oxygen, the patient will eventually suffer from respiratory distress and die in terrible circumstances [if they aren’t given enough].”

The coroner’s investigation is revisiting what happened in Quebec’s elderly residences in the spring of 2020, where more than 60% of COVID-19 deaths in the province occurred.

Other residents died of dehydration and negligence due to infection chaos and shortage of personnel. Nearly half of the elderly residences in Quebec have experienced the epidemic.