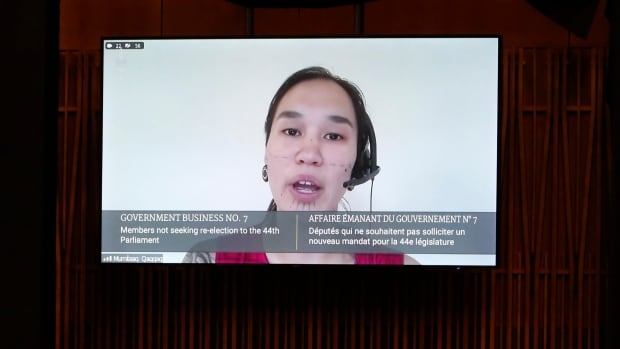 
Mumilaaq Qaqqaq said that every time she entered the House of Commons, she kept her parliamentary badge by her side-just in case she had to prove who she was.

The outgoing New Democratic Party member said that since her election in 2019, she has been frequently stopped and questioned by the Parliamentary Protection Service (PPS).

Kakak said in the House of Representatives on Tuesday: “I was jogging with the security guards in the corridor, and they put their hands on me and racially discriminated against me.”

She told CBC News that it was “dreading.”

“Why don’t you properly train your security guards in federal agencies so that they don’t do these things so that I don’t feel scared when I go to work?”

In her farewell speech on Tuesday, Qaqqaq said that entering the gate of power put her into survival mode. In order to complete her tenure, she said she must cheer herself up in the elevator and spend some time in the bathroom to calm herself down.

In view of Kakak’s remarks, the leader of the New Democratic Party, Jagmit Singh, called for changes at the highest level.

Singh said at a press conference on Wednesday: “We need to be vigilant and continue to put pressure on the House of Commons and Parliament to make it a more popular space.”

“For a long time, parliamentarians have been older white men. This is the vision or hypothesis, so people like Mumirak really broke this concept.”

“It is totally unacceptable to make a person feel insecure in one of the safest places in this country because of who she is and what her identity is. In fact, this is an attack on her parliamentary privileges,” M. Le said.

PPS contacted her on Wednesday to resolve her concerns.

The service stated in a statement to CBC News that it is committed to fulfilling its security mission while ensuring that members of the parliamentary community “enjoy a safe, welcoming and inclusive environment.”

Qaqqaq is the youngest member of parliament in Nunavut’s history, and she said that her decision not to participate in the next federal election is personal.

She said that she decided to participate in the 2019 competition shortly before the election because she received a note from a group of young people that said “The government needs you”.

Kakak said in an interview: “I want to be a parliamentarian because I thought this was the best opportunity to help as many people as possible.”

“It took me a long time to realize how hard and how hard I worked and tried to oppose a system so strongly that in the end-in various forms or forms-it still works with the people I represent And against me.”

Qaqqaq said she was disappointed by the lack of progress in the housing and suicide crisis facing the Inuit.

However, Kakak said that she will continue to support the New Democratic Party and does not rule out running for public office again at some point in the future.

Qaqqaq said: “I was fortunate to be part of a party and team. I never felt the need to hide my feelings.”

Qaqqaq did not hide why she took two leave.

The first is to deal with depression and burnout after a thought-provoking housing trip to Nunavut last fall. She rested for eight weeks.

Mumilaaq Qaqqaq, a member of the New Democratic Party of Nunavut, delivered a stern farewell speech to the House of Commons, saying that she was racially discriminated against and that “every step reminds me that I don’t belong here.” 2:00

Qaqqaq said that she quit in April due to mental health reasons. She questioned the locality of Liberal MP Yvonne Jones, Claiming to be an Inyuk.

“That conversation turned into a direction I didn’t want,” Qaqqaq said. “It totally became Jones vs. Qaqqaq…I didn’t approach it in the right way.”

The non-status group was established in 1981 under the name Labrador Metis Nation, and Renamed in 2010, Saying that it better reflects the traditions of its members.

Jones said at the time that she didn’t have to “prove my identity to others” [Qaqqaq] Or anyone else. “

Qaqqaq is not sure what will happen next. Now, she is enjoying small things, such as beading. She just polished and re-stained her deck.

Qaqqaq, 27, said she still has regular, young adult things to do. But she is considering big plans in the future, such as the possibility of applying to law school.

In the end, she wants to find something she likes and is likely to work with young people. She hopes that she can continue to inspire young people.

“I have shown young people and indigenous people that we can live in certain places, even if we don’t think they were born for us,” Qaqqaq said.