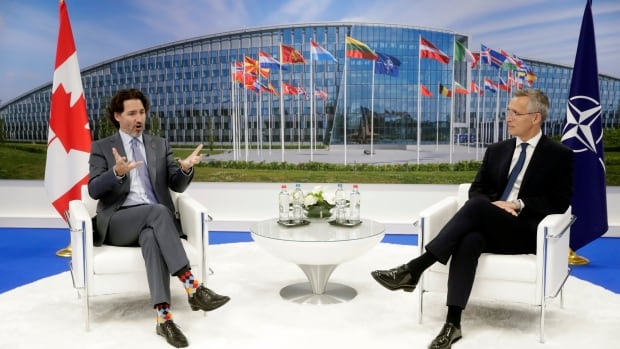 
After NATO and the G7 took a tougher public stance against China, Newton’s third law of motion—every action produces equal and opposite responses—was fully demonstrated this week.

Before Beijing authorized an aerial display of force over Taiwan, the ink on the communiqués of the two summits had not dried.

On Tuesday, Taiwan’s defense officials called a “record number” of Chinese military aircraft (28 in total) that flew into the airspace of autonomous islands—an action that was widely interpreted as Beijing’s middle finger to the world’s leading Western democracies.

On the same day, Chinese Foreign Ministry spokesperson Zhao Lijian condemned the remarks and measures made at the G7 summit in Cornwall last weekend as an attempt to interfere in “China’s internal affairs.”

NATO-a more blunt tool on the international stage-has gone further than the G7 countries and declared that China poses a security threat to Western countries.

Importantly, NATO is committed to deepening partnerships across the Asia-Pacific region, especially with Australia, Japan, New Zealand, and South Korea.

NATO Secretary-General Jens Stoltenberg said it is also looking for new friends in “countries in Latin America, Africa and Asia.”

In some respects, this week’s summit in Brussels has laid more foundations for NATO’s global expansion—since the former Trump administration put China on the NATO agenda at the last summit in London 18 months ago, This idea has been quietly permeating.

In December last year, the foreign ministers of Australia, Japan, New Zealand, and South Korea were invited to the NATO foreign ministers’ meeting for the first time to discuss common policies and Beijing’s increasingly tough attitude, but there were no big headlines about the pandemic.

“China is not an adversary,” Stoltenberg insisted this week-although he pointed out that China’s new icebreaker shows that it has plans for the Arctic, China has participated in military exercises with Russia in the Euro-Atlantic area, and it has increased its Nuclear arsenals and conventional military forces, and conduct aggressive cyber activities by spreading false information.

“China is getting closer and closer to us”

When talking about NATO’s basic documents, Stoltenberg said: “We are concerned about China’s coercive policy, which runs counter to the basic values ??contained in the Washington Treaty.”

The Secretary-General also believes that strengthening cooperation with Asian countries “is not about moving NATO to Asia” but acknowledging that “China is moving closer to us.”

The events of the past week have to some extent supplemented the efforts of the administration of US President Joe Biden to invigorate the security dialogue on the four sides, involving Australia, India, Japan, and South Korea that are vigilant to each other.

Although the move to engage with Asia-Pacific partners may make the “North Atlantic” part of NATO’s name look obsolete, a defense expert said there are differences and long-term differences between countries seeking this deeper security partnership. Grievances.

Tina Park said: “Considering that the traditional role of the United States in maintaining strategic balance in Asia has been questioned during the Trump administration, I think this call for more engagement with NATO partners in the Asia-Pacific region is absolutely timely. .” Vice President of the Canadian NATO Association.

The relationship between Japan and South Korea is particularly difficult, dating back to Japan’s brutal occupation of the Korean peninsula before and during World War II.

At the end of 2018, a South Korean destroyer locked its target radar on a Japanese patrol plane-the confrontation turned into a major diplomatic event.The two countries apologized for territorial claims and Japan’s refusal to recognize South Korea’s treatment “Comfort Women”.

Park Geun-hye said: “On defense issues, these are just some of the issues that may hinder future cooperation between Seoul and Tokyo.”

“Although the idea of ??having Asian partners is very pragmatic and positive for NATO, the actual approach of bringing these partner countries together to meet NATO’s strategic goals is not an easy task. But I think this is something we should continue to try.”

Even in the current 30 member alliances, there are disagreements on the Asia-Pacific pivot. Compared with Beijing’s plan, some European member states that have joined NATO to protect themselves from Russia’s influence are more concerned about Moscow’s next move.

Estonian Prime Minister Kaya Callas appeared in a panel discussion with Prime Minister Justin Trudeau at the Brussels Forum of the German Marshall Foundation in the United States on Monday, making it clear that she believed that the main security threat was a threat to her front yard-she And her border country and Russia.

“Because of Russia’s aggression, Russia is an obvious threat, and this is what we emphasize here,” she said. “They must show it in action.”

Trudeau said he believes that the league is capable of “chewing gum while walking” when dealing with two authoritarian opponents.

Last spring, a small but fascinating example of why China quickly entered NATO’s radar: the arrest and conviction of an Estonian national, a famous marine scientist who spied for China.

Tarmo Kouts leaked secrets to Chinese military intelligence. Until last year, he was the vice president of NATO Maritime Research and Experiment Center.