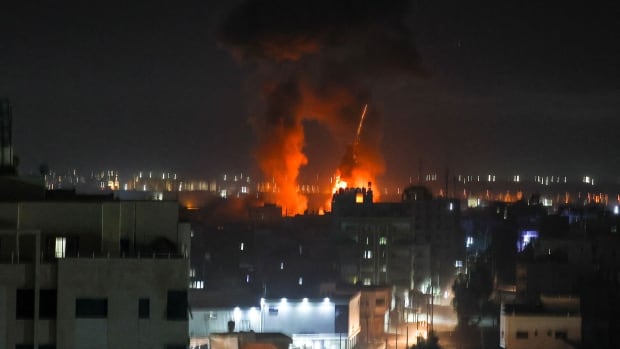 
Israel launched an air strike in the Gaza Strip on Wednesday — the first since the end of the 11-day cross-border fighting last month — in response to burning balloons launched from Palestinian territory.

The Israeli military stated that its aircraft had attacked the Hamas armed compound in Gaza City and the southern town of Khan Younis, and it was “prepared to deal with all situations, including renewed fighting in the face of continued terrorist acts from Gaza.”

Outbreak, a test for Israel Fragile new governmentLater, Israeli nationalists marched in East Jerusalem on Tuesday, which aroused the threat of action by Hamas, the militant group in Gaza.

The military stated that the attack was in response to the launch of burning balloons, which, according to reports from the Israeli fire brigade, caused 20 fires in open spaces in communities near the Gaza border.

This is the first attack by Israeli and Gaza militants since the ceasefire agreement promoted by Egypt came into effect.

A Hamas spokesperson confirmed the Israeli attack, stating that the Palestinians will continue to “brave resistance and defend their rights and holy land” in Jerusalem.

A few hours ago, thousands of Israelis waving flags gathered around the Damascus Gate in the Old City of Jerusalem before heading to the holy Western Wall of Judaism, arousing anger and condemnation from the Palestinians.

Israel occupied East Jerusalem in the 1967 war and later annexed it in an internationally unrecognized move. Israel uses the entire city as its capital; the Palestinians want East Jerusalem to be the capital of future nations including the West Bank and Gaza.

Prior to Tuesday’s parade, Israel strengthened the deployment of the Iron Dome anti-missile system in response to a possible rocket attack from Gaza. But when the marchers began to disperse after nightfall in Jerusalem, there was no sign of rocket launches in the enclave.

The parade was originally scheduled to be held on May 10 as part of the “Jerusalem Day” celebration of the Israeli occupation of East Jerusalem.

At the last minute, the march was diverted from Damascus Gate and the Muslim quarter of the Old City, but this was not enough to prevent Hamas from launching rockets into Jerusalem, and these attacks triggered the fighting last month.

Although the crowd on Tuesday was noisy, it seemed to be much less than last month’s parade. From the Damascus Gate, they circled the old city to the Western Wall, which is the holiest place where Jews can pray.

Before the march, Israeli police cleared the area in front of Damascus, closed traffic roads, ordered the closure of shops, and deported young Palestinian protesters. According to the police, the police arrested 17 people suspected of participating in the violence. Some of them threw stones and attacked the police. Two police officers needed medical attention. The Palestinians said that five people were injured in clashes with the police.