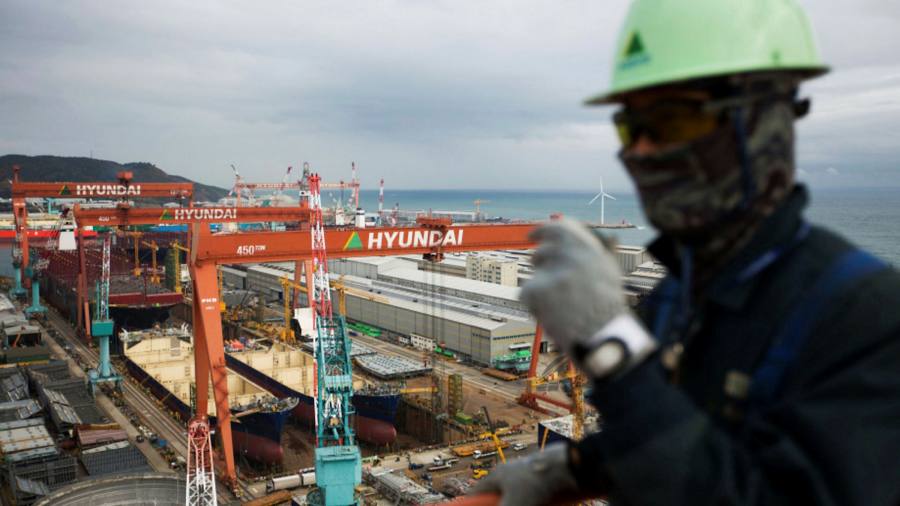 
As global trade rebounds after the Covid-19 pandemic, South Korean shipbuilders and shipping companies will seek to raise billions of dollars through stock market listings in the second half of 2021.

According to investment bankers with knowledge of the transaction, the shipbuilders Hyundai Heavy Industries and marine conglomerates H-Line Shipping and SM Line are planning to conduct initial public offerings totaling US$3.3 billion as the two companies are betting on a potential multi-year trade super cycle . After a decade-long downturn in related industries.

“As the industry enters an upward cycle, investor confidence in the industry is improving rapidly,” said a Korean investment banker who understands the situation. “We expect strong demand for IPOs, as ship prices and freight rates are expected to increase.”

The investment banker said that Hyundai Heavy Industries is part of the world’s second largest shipbuilder and may raise between US$1 billion and US$1.5 billion from the Seoul IPO in mid-August.The proceeds will be used to develop environmentally friendly ships and expand low-carbon production facilities to meet Stricter environmental regulations.

As global business recovers faster than expected, the surge in demand has led to the best year for global shipyards and shipping groups in more than a decade A leap in shipbuilding orders And freight.

According to data from industry tracking agency Clarkson Research, global ship orders in the first quarter doubled from the same period last year to 10.2 million compensated gross tonnage, which is a measure of the workload required to build ships. South Korean shipbuilders won more than half of the orders.

Clarkson predicts that this year’s global orders will increase by nearly 50% to 31.5 million CGT, and will reach an annual average of 35.6 million CGT between 2022 and 2025. Hyundai Heavy Industries has won orders for 42 ships this year, valued at US$5.9 billion, surpassing the US$3.5 billion it received in the entire 2020.

The share price of Hyundai Merchant Marine, South Korea’s largest shipping group, has more than tripled this year, mainly due to congestion at large ports and Suez Canal interrupted March.

However, due to investors’ concerns about Hyundai Heavy Industries’ IPO plan The worker died. According to the company’s labor union, approximately 50 people have died from accidents and diseases in the past 10 years, 76% of which were subcontractors. After two workers died this year, the Ministry of Labor suspended some operations of the company’s Ulsan Shipyard last month.

“We will do our best to prevent regrettable situations from happening [workers] The principle of ensuring safety first loses precious lives in our workplace,” said Han Young-seuk, president of Hyundai Heavy Industries.

Investors call for change. “They need to deliver on their promise of improvement [environmental, social and governance] Standards,” said Park Yoo-kyung, a consultant for the Dutch pension fund APG. “As long as the deaths of workers continue, we cannot invest in this company. “

Video: How the coronavirus is changing global shipping routes